Everything I thought I’d never love about theatre in lockdown 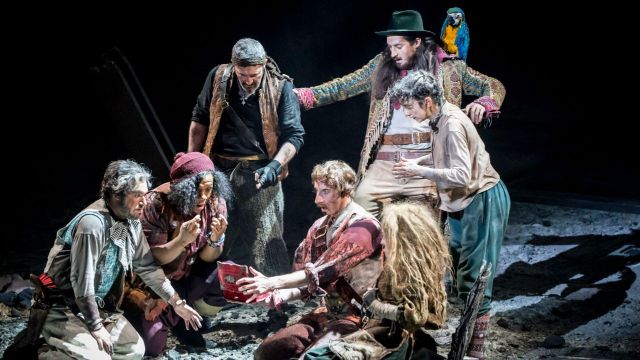 By Jane Keehn – from Perth

I am sitting at the National Theatre in London but my neighbor is doing a loud spot of whipper-snipping and my old Labrador is demanding my attention on the couch. Still, I am watching Jane Eyre – on stage… online… on my iPad… on my own. When the distractions overwhelmed my experience, I simply paused my iPad. Later, I figured out how to sync the player with my TV, and I watched the second act on the bigger screen. The high definition output was crystal clear. I’m enjoying this easy access to international stage craft. Should I be feeling guilty?

One of the first things I thought, (when lockdown was imminent and cinemas and theatres were told to close) was: Thank goodness Highway to Hell had made it, along with all my tickets for the Perth Festival two weeks earlier. Like most Stage Whispers readers, my life is sustained by the Arts, and many artists I admire (and some I don’t even know of yet), will be negatively affected by Covid-19 restrictions on human interaction and events. Here in Perth, students from the Western Australian Academy of Performing Arts talk of extending their academic year to allow for cancelled shows to go on.

Speaking of which, Andrew Lloyd Webber now has his own YouTube event every Friday, aptly called The Shows Must Go On. I tuned in for Jesus Christ Superstar with Tim Minchin as Judas and Mel C as Mary Magdalene. I’d never seen JCS live on stage before, and being Good Friday, it was appropriate viewing. I loved it!  The rock concert staging, with close-ups on big screens, certainly lent itself to viewing on a hand-held device with headphones at maximum volume. The Simply Piano ads weren’t too intrusive and could be skipped or watched in full for amusement.  And now I’ve finally seen JCS, I understand what all the fuss was about! This production also introduced me to new cast members I’ve never heard of or seen perform before.

Ready for more ‘live theatre’ in semi-isolation, I have investigated some more National Theatre offerings coming up soon: One Man, Two Guvnors and Twelfth Night, which I saw at the cinema a couple of years ago will definitely be worth revisiting for free. Jane Eyre was showing for about two weeks, followed by Treasure Island, Twelfth Night, and now Frankenstein

Even though my sister lives in Queensland, I’ve been able to join her on the couch for some innovative performances thanks to live streaming: from Brisbane, The Little Red Company’s Iso Late Late Show; from Melbourne, Kate Ceberano live at the MEMO; and from New York, musician and musical theatre performer, Allan Harris in Harlem After Dark, Unplugged shows, live from his living room.

Was it Antony Sher or Simon Callow who confessed to having a type of claustrophobic reaction to sitting in an audience – a white heat of nervousness so debilitating and distracting that they have to sit near the aisle in the dark venue? Can I confess I agree? Sure, it is lonely sitting by myself with headphones rather than sitting with a friend, being able to whisper between scenes and catch up after the show for a drink. But, it’s a lot more relaxed than that hot, burning, adrenaline-rush feeling of being boxed in – worrying about the interval and will there be enough time for a drink/ toilet break/ chat – having to stand up to let latecomers scoot past before the lights go down. And you adjust, somehow, to the actors’ voices projecting to the back row and pitching their performance to the live audience instead of the camera. It’s fascinating to note the difference.

Maybe, in the not-too-distant future, once the curtain’s closed on the lockdown and opened on live theatre again, we can continue to see shows ‘live’ from Broadway or the West End or Melbourne, Adelaide, Sydney, Brisbane and Perth, extending the reach of those shows and allowing a wider audience to enjoy them from the comfort of our lounge rooms. Theatre-lovers could save time and money on travel and satisfy our need to see the impeccable calibrations of performers, the staging, the design and direction choices of local and international theatre companies, from the safety and comfort of our own homes (Glenda Jackson’s “Lear”, anyone?) and the experience could still be as ephemeral and exciting as the real thing.

Meanwhile, I’ll be exploring podcasts such as The Hayes Theatre and more virtual theatre from the Sydney Theatre Company – Shari Sebbens reading scenes from Black is the New White by Nakkiah Lui, and The Harp in the South by Kate Mulvany – perhaps one of the only benefits of this strange, unprecedented time.

And while I’m at it, I will be supporting my local branch of the Actors’ Benevolent Fund… and backing ‘The curtain will rise again’ campaign from the Queensland team with their splendid merchandise: