Have Show: Will Travel 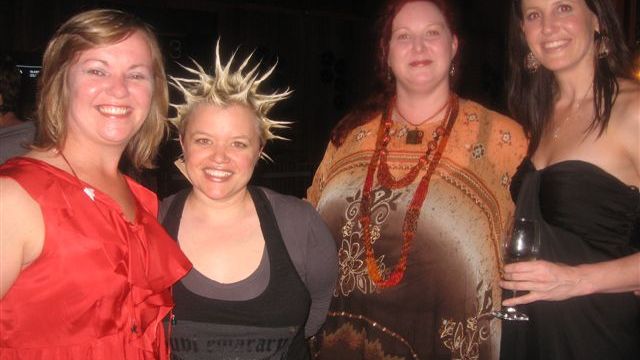 Ever wondered how plays get chosen to tour regional venues? David Spicer reports it’s a bit like Australian Idol. Producers get 10 minutes to perform – and then get voted on or off the short-list.

Twice a year Australia’s regional, suburban and city theatres get together for an event called Long Paddock. It’s where dreams can be made or shattered. Producers sing for their supper, hoping to attract interest to tour their shows around Australia.
In September Long Paddock was held in the new Glasshouse Theatre at Port Macquarie on the New South Wales mid-north coast.
During a break a theatre manager from Queensland sidled up to me and said words to the effect.
“I’m tired of buying in these serious dramas which nobody comes to. We are moving towards bringing in more broad entertaining pieces.”
It’s the dilemma all regional venue managers have. What shows to pick for their audiences?
The designated shows for 2010 were announced the day before Long Paddock opened. The big winner was HIT Productions, which will tour Louis Nowra’s Cosi to 55 venues across six states. Garry Ginivan Attractions will tour Wombat Stew – The Musical to 49 venues. The biggest grant is going to Bell Shakespeare to tour Twelfth Night and King Lear, while there are also tours from Bangarra, Sydney Dance Company and Co-Opera.
Only one overtly popular show appeared to get a substantial grant. Peace Train - The Cat Stevens Story will tour 38 venues.
The ‘audition’ I attended in Port Macquarie was for 2011. To get to Long Paddock the producers have to first pass Cyber Paddock. Naturally Cyber Paddock is on-line. Theatres vote for the shows which they like the sound of, before they get to see them in the flesh at Long Paddock.
It appears to be very well organized. The producers pitch in genre clusters. All the children’s theatre pieces came together, followed by drama, dance, music and so forth. The producers used audio-visual, speech, video and occasionally live performance to make their pitches.
To the credit of organizers, the off-beat pieces of theatre from new or emerging producers make it to Long Paddock. Sometimes they get voted in – other times they get in on a wild-card. A bit like a tennis tournament - a show which the judges view deserves consideration gets into the draw. September’s wildcard included The Adventures of Alvin Sputnik: Deep Sea Explorer. This is from a company called Weeping Spoon Productions which uses mime, puppetry and animation to explore the deep blue sea.
Once the pitches from each genre are finished, all the producers leave the room. Theatres make comments and a show of hands indicates which shows are going to make it to the next short list.
Final acceptance relies on getting sufficient votes in a state to make a tour viable.
Overall my impression was that many of the shows being pitched might struggle to attract large mainstream audiences. Commercial pitches such as Breast Wishes and the Ensemble Theatre’s bid to tour Let the Sunshine by David Williamson were the exception rather than the rule.
One odd quirk in the system is that if a show is too popular, such as Menopause the Musical, it gets disqualified because the Government bodies deem that it doesn’t need any help.
Also missing were pitches from Australia’s two largest theatre companies, The Sydney Theatre Company and Melbourne Theatre Company.
Why isn’t part of their focus developing one play a year to tour Australia?
This year in Australia there have been three different productions of God Of Carnage by Yasmina Reza in Sydney, Melbourne and Brisbane. Why couldn’t there be one production of this – and a tour set up of the latest hit play to regional Australia – instead of audiences outside the capital cities having to wait years until producers with fewer resources put it on?
Major theatre companies should be working to produce small cast hit Australian written plays which can tour the country. At present this is left to smaller organizations such as Critical Stages.
The pitches also appear to be one-way traffic. Producers come up with ideas that are pitched to theatres, rather than theatres saying, ‘our audiences want these types of shows please go out and put them together.’
Efforts are being made to better organize the touring network. Hopefully this will result in better shows on the stages of regional theatres.

They love their Aussie names in this part of the performing arts industry. An organization called Blue Heelers – rounds up the shows and puts together Long Paddock.
Another organization (APACA) The Australian Performing Arts Centres Association holds its conference before Long Paddock and presents the Drover Awards for excellence in regional touring.

This article was first published in the November / December 2009 edition of Stage Whispers.