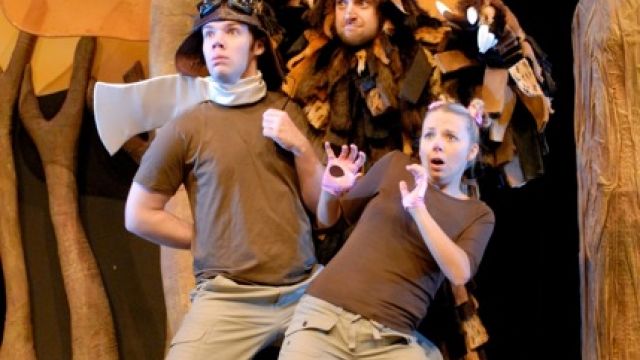 It’s like selling ice to the Eskimos.
Last year, amidst the economic gloom afflicting the UK, Australian actors were asked to perform an English piece of children’s theatre in the UK.
The musical is called The Gruffalo and the cast has now returned for a national tour.
For Australian producer Christine Dunstan it was a remarkable coup.
She said the English theatre company (Tall Stories) which developed the show “loved my cast so much, they took them from Australia for a Christmas / New Year tour in Stockton and Birmingham.”
“The three actors are young, so for them it was a fantastic, very white and very cold Chistmas,” she said.
The Gruffalo is rapidly becoming a hit.
It won the 2009 Sydney Theatre Award for Best Production for Children.
Stage Whispers reviewer Jay Mckee got himself top billing with the La Boite Theatre publicity department by urging parents to “Beg, borrow or steal tickets. Your kids will love you for it.”
Based on the popular book by Julia Donaldson and Alex Scheffler, The Gruffalo only lasts fifty minutes.
“It is a very sweet and clever piece. It is based on the premise of a mouse who goes through a forest in search of a nut,” Dunstan said. “Along the way she comes across a fox, an owl and a snake. She is very clever. Every time they try to catch her, she scares them off by saying she is on the way to meet the fearful Gruffalo.”
The mouse gets into strife when the last creature she meets is The Gruffalo himself.
Christine Dunstan says the strength of the stage show is the characterisation.
“The three predators are such a send up. The fox is a London cabbie, the snake is a Mexican rattle snake, while Wakim, the wolf, is a retired Air Force commander,” she said. “It is a clever adaptation which is just as entertaining for adults as it is for children.”
“For many children it is their first experience of live theatre which gives them the chance to learn about the way actors feed off an audience response,” she said.