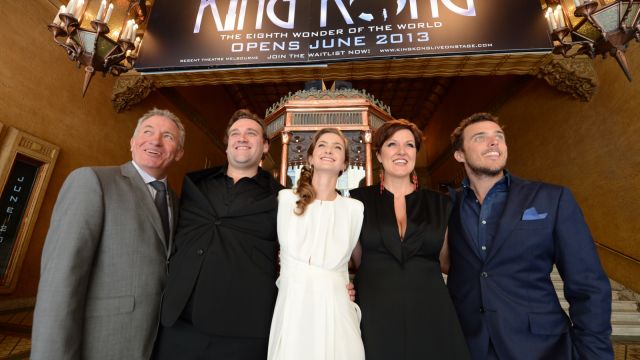 After five years in development the spectacular musical KING KONG  will premiere 15 June 2013 at the Regent Theatre in Melbourne for its exclusive Australian season, produced by Global Creatures, makers of Walking With Dinosaurs – The Arena Spectacular (WWD) and How To Train Your Dragon Arena Spectacular (HTTYD, in association with DreamWorks Theatricals).

The entire cast of KING KONG has now been announced (well, 48 of 49, with one 'King's Man' still to be cast). They include actors, singers, dancers, circus performers and puppeteers.

Check out the preview music sampler. 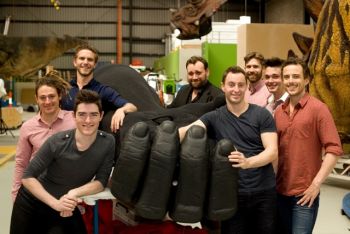 “We’ve been scouring the country since February 2011 for our cast and I am thrilled that we can finally reveal the all-Australian company that will join our principal cast, international creative and music team to bring Kong to life,” said Carmen Pavlovic, CEO of Global Creatures.

“Not only will KING KONG be exclusive to Melbourne, but we are building Kong himself in our West Melbourne workshop, and we were pleased to discover it was Victoria’s arts training institutions that have proven to be the crucibles of the talent we needed.”

The Victorian College of the Arts (VCA) is the biggest tertiary provider of cast to KING KONG, with both Adam Lyon (Carl Denham) and Chris Ryan (Jack Driscoll) being graduates, in addition to another six of the cast. In particular, the College’s Music Theatre course has made a miraculous recovery after being briefly cancelled by the University of Melbourne in 2009, supplying five graduates to the show.

Professor Su Baker, Director of the VCA said, “It is thrilling to see so many of our graduates, across a number of art forms, working on KING KONG. It demonstrates the quality of education and strength of training at the VCA is proving attractive to producers like Global Creatures and establishes Melbourne as the home of Music Theatre in Australia, supported by the reintroduction of our Bachelor of Fine Arts (Music Theatre) program.”

Victoria’s National Institute of Circus Arts (NICA) has also proved an invaluable resource for the production, not only during the numerous workshops of KING KONG, but in supplying six of the “Kings Men”. These aerialists will be purpose-trained by Puppetry Director Peter Wilson (and former head of VCA Puppetry) and Aerial/Circus Director Gavin Robins to manipulate the one-tonne, six-metre, giant silverback Kong on stage.

“I am thrilled to see NICA graduates bringing Kong to life as part of the ‘Kings Men’. It is fantastic that NICA and its facilities are playing a vital role in this

“I am ferociously proud of our 100% made-in-Australia cast. Audiences should brace themselves; not only does our cast dance and sing and act, but they fly, flip, and fall through the air, looking darn gorgeous in the process. Never before have I had the privilege of working with such a group of world-class entertainers,” said KING KONG Director Daniel Kramer.

In addition to its 49-strong cast, KING KONG will also employ a crew of 76 for the entire run of the show. Because of the sheer scale of the production it will not tour to other states or to New Zealand.

Behind the Scenes of King Kong 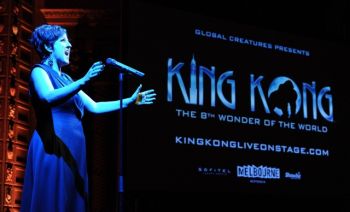 Coral Drouyn was at the production's launch at Melbourne’s Regent Theatre Plaza Ballroom on Sunday October 6, 2012, where she spoke to principal several cast members and director Daniel Kramer.

This is going to be colossal! And I don’t just mean Mr….sorry, His Majesty… Kong himself. There could be nowhere better than the Art Deco Plaza Ballroom at the Regent to launch what will undoubtedly be the greatest show Australia has ever seen. Previous Global Creatures productions (Walking with Dinosaurs & How to Train Your Dragon) have shown the company’s commitment to technical excellence. Nobody does it better. But the difference in this production is the commitment to the love story, and to a script with characters that engage us. Craig Lucas is a Pulitzer Prize and Tony Award nominee and his Light in the Piazza has one of the most stunning books in recent years. So the accent will be on story and character and emotional connection; and of course stunning music by Marius de Vries and others.  Of course the technical achievements will be gobsmacking; how could they not be with a 7metre high Gorilla strutting the stage and leaning out beyond the footlights into the audience.

After hearing three fabulous songs yesterday….with a full symphonic string section on stage, I had a chance to talk to some of the stars and even the director Daniel Kramer. Queenie Van de Zandt, (Cassandra) one of our most experienced and charismatic performers, was the first actor signed to the production. Director Kramer had seen her in the Spiegeltent production of Smoke and Mirrors and knew he had to have her. It worked to her advantage in more ways than one. “Usually in a musical you simply have to sing in whatever key the music is written in. Sometimes that’s difficult. But I got a chance to work with Marius and Michael (composer and lyricist) while my big number was being written. They knew my vocal strengths and played to them, so I always felt stretched but comfortable with every note. The song “Rise” is the most incredible gift. I can’t wait to sing it to a full house.” 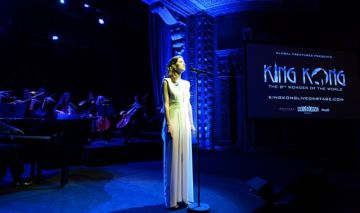 Esther Hannaford, (Anne Darrow) looking fragile and ethereal, sang the lovely “Full Moon Lullaby”, a song she sings with her huge hairy co-star. I asked he if she was nervous about the technical side of the show…being lifted so high above the stage. “No, not nervous,” she told me, “just excited. I did have one moment of anxiety  when, working with the puppet’s hand only, and it grabbed my arm, I was suddenly struck by how enormous it was, almost unbelievable really. But the technical crew are so conscious of safety I know there’s nothing to worry about. It will all seem like magic.” 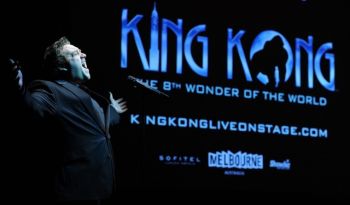 But the real Cinderella story of this production is Bendigo Community Theatre actor Adam Lyon who is playing one of the leads – entrepreneur Carl Denham - in his first professional stage show ever! “I only heard about it six weeks ago,” he says, just a little overcome by how it’s all happened. “It was just five days before the workshops started and I thought I was just filling in as a second understudy. If I thought about getting into the show at all, it would have been as a member of the ensemble. Now I’ve actually got an agent. I’ve dreamed about this, but I still can’t believe it.” Dreams do come true in this business, that’s one of the great things about it.

Director Daniel Kramer is a visionary who has been acclaimed for his European Opera productions…he’s a much talked about “wunderkind” of theatre with a strong ethic towards maximum emotional connection to the audience. “The logistics of this are enormous” he tells me when I ask about the sheer problems associated with “blocking” on stage. “The only way we can rehearse is with a life size working model of Kong – albeit not the finished creature - and on the stage of the Regent theatre itself. We have a six month rehearsal period and we’ll need every day of that. There are no short-cuts, and we wouldn’t take them if there were.” 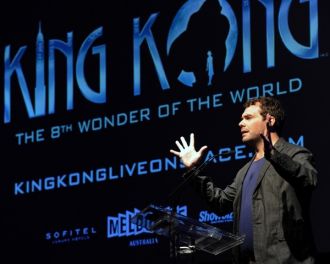 When you hear producer Carmen Pavlovic speak about the five years it has taken to come this far, you hear the dedication and love in her voice. And that’s an inspiration to all theatre goers. It will be a mindboggling experience, but at its heart will be the “Beauty and the Beast” love story which has engaged us for decades. And if we don’t all cry at Kong’s fate, I will be very surprised.Based on one of the great modern myths, this world-first adaptation as a large-scale musical has been created by an international team comprising: director Daniel Kramer; writer Craig Lucas; composer and arranger Marius de Vries; young New York-based lyricist Michael Mitnick; choreographer  John O’Connell; production designer Peter England; creature designer Sonny Tilders, the mastermind behind the amazing animatronics in WWD and HTTYD; costume designer Roger Kirk; UK lighting designer Peter Mumford;  US sound designer Peter Hylenski; Berlin based projection designer Frieder Weiss; international aerial and circus director Gavin Robins and puppetry director Peter Wilson.

Look who's Reding Stage Whispers at the King Kong launch. 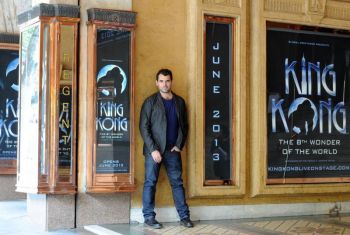 More detail and our earliest coverage

Composer and arranger Marius de Vries, whose credits include the soundtracks for Moulin Rouge and Romeo + Juliet as well as being the writer/arranger/producer for artists such as Madonna, Bjork and Rufus Wainwright, will create and oversee the score, ranging from revamped 1930s Broadway classics like ‘Get Happy’, ‘I Wanna Be Loved By You’ and ‘Brother Can You Spare a Dime’, to new and existing songs from contemporary artists, including Robert Del Naja from Massive Attack, Sarah McLachlan, Justice, Guy Garvey from Elbow and The Avalanches. A key collaborator on the musical landscape for the show has been Stephen Pavlovic from Modular People, the Sydneybased music label and promoter, while New York’s Michael Mitnick has contributed lyrics to several new compositions.

Carmen Pavlovic, CEO of Global Creatures says, “I am so excited to have such distinctive and original artists joining us on this musical adventure – they represent our original vision for a score that would travel through genre and time in a way that is contemporary and, I hope, redefining.”

KING KONG will feature a cast of 49 actors, singers, dancers, circus performers and puppeteers; a crew of 76; and arguably the most technologically advanced puppet in the world – a one-tonne, six-metre tall giant silverback. 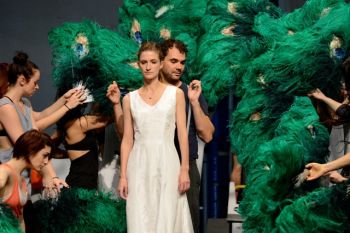 KING KONG tells of a Hollywood director, Carl Denham, who takes his crew on a perilous journey to the last uncharted place on earth, Skull Island, to capture a huge prehistoric creature, the last of his kind – Kong. The love affair between Denham’s star, Ann Darrow, and his first mate, Jack Driscoll, unfolds against the burgeoning horror of Kong’s ultimate escape and threatened destruction of Manhattan.

Director Daniel Kramer says, “It’s tempting to focus on the spectacle of King Kong himself. But it is only through the humanity of the life around him – the people of New York City, the comic megalomania of filmmaker Carl Denham, the stubborn opposition of first mate Jack Driscoll, and the grace, beauty and power of our leading lady, Ann Darrow – that he truly takes life. After three years of auditions and workshops, it is an honour to introduce the world premiere cast of KING KONG.” 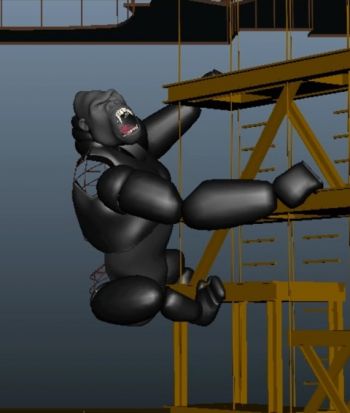 Production designer Peter England (WWD and HTTYD) will create the many worlds of the story: from a burlesque theatre, to the loading docks of NYC, to a ship in an unchartered ocean, to a primeval jungle, to a mountaintop, to a beach, to a Broadway theatre and finally to the top of the Empire State Building.

Creature designer Sonny Tilders and his team have undertaken a hugely complex journey in their creation of Kong. An imposing, stylised silverback of exaggerated proportions, he is a highly sophisticated animatronic/marionette hybrid that will be controlled by the integration of hydraulics, automation and the manual manipulation from a team of puppeteer/aerialists (The King’s Men) on stage, and off.

Read more on Designing KING KONG: The Creature, The Sets and the Costumes with lots of set, costume and creatute images.