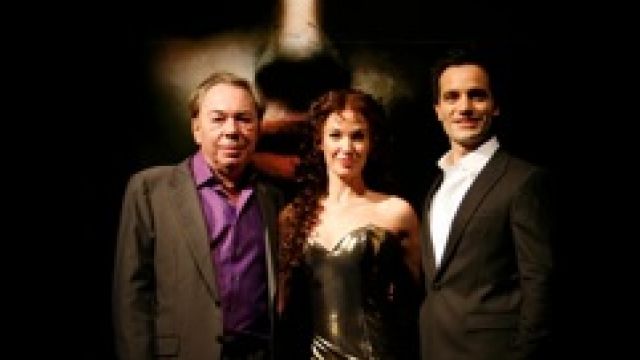 During October Andrew Lloyd Webber gathered the international media in London to announce his new musical offering. Douglas Mayo went along to hear the news and chat with Lord Lloyd Webber, Director Jack O’Brien and the two stars of the show.

Yes, the announcement has been made that Love Never Dies, a musical which continues the story of The Phantom Of The Opera, will open in London in March 2010. The genesis of this show has been a long one. There have been numerous collaborators and several false starts but this time Lloyd Webber seems convinced he’s got it right.

Lloyd Webber started the process of dreaming up a new Phantom story many moons ago with collaborator Frederick Forsythe. Lloyd Webber says, “It was Freddy’s idea to relocate the Phantom to New York, where he would rule over Manhattan from above,” ideas which were eventually published in Forsythe’s novella The Phantom Of Manhattan. The duo set to work but ultimately it came to nothing.
The main problem for Lloyd Webber seemed to be based in the story. Original set designer Maria Bjornson once quipped to Lloyd Webber that the ending of the original show was entirely unfulfilling and Lloyd Webber was quick to comment “There’s unfinished business here, the ending of Phantom is quite enigmatic to put it mildly. I just felt it would be great to come back to the characters but it all came back down to the story.”

It was not until Ben Elton entered the frame that Lloyd Webber seemed to have found his solution. It was apparently Elton’s comment that people wanted to know what happened to the characters they already knew that seemed to seal the deal and set the train moving again. Together with Jack O’Brien, director of Hairspray and Glenn Slater, lyricist of Sister Act and The Little Mermaid, a new story was developed and it was decided that Love Never Dies would pick up ten years on. The Phantom has relocated to Coney Island in New York. He lures Christine to the USA with promises of a performance contract. More than this is being kept shrouded in secrecy at the moment. “It’s a fantastic story,” says Lloyd Webber “I have found that in musical theatre story is fundamental, therefore the story drove this”.

Jack O’Brien comments that once on board as director he offered advice to the whole team. “You are playing around with people’s memories and aspects of their imaginations here, you’d better know what you are doing!” he says. “I thought it was a good idea to have some Americans on the team for this one and let’s face it, the atmosphere in America was very different to France at that time so it helped to have that vocabulary on tap creatively. When I came on I became the nasty schoolmaster. Yes but why? Yes but who? How did that happen? Why did that come about? because audiences are going to be listening very astutely and we can’t afford to be cavalier. If it doesn’t make sense then we are culpable,” O’Brien said.

Musical Theatre history is scattered with the ghosts of sequels to hit musicals which failed to achieve the success of the originals. Annie 2, The Best Little Whorehouse Goes Public and Bring Back Birdie failed spectacularly. Imagine then the pressure to follow up what is now officially the single most successful piece of entertainment ever created. Having taken billions of dollars worldwide, surely the pressure to succeed is huge? Even though the show is billed as “Phantom – The Story Continues”, mention the word “sequel” to Lloyd Webber and the response received is interesting. “I don’t regard this as a sequel, but more as a stand alone piece. There are practically no musical quotes from the original show; none of the original melodies have been used. It’s a completely new show. If you haven’t seen the original you wouldn’t have any problems”.

“It struck me that Coney Island as a setting was exotic, sinister and slightly macabre. You just have to wonder what this place must have been like,” said Lloyd Webber. O’Brien comments “I mean no one had seen electricity at that time. When immigrants sailed into New York at night it wasn’t the Statue of Liberty they saw first, it was the electric lights of Coney Island. It is in this location we now find the Phantom. He is hiding in plain sight amongst all the other freaks and there is no doubt he is king of his domain”.

We talked to Jack O’Brien about a rumour that had been circulated that the show was to open in three or four cities around the world simultaneously, a mammoth feat for any new musical. “Yes, Jerry Mitchell and I saw the value in doing this because first of all the show is completely written. I’m not going to be sitting up till 3am re-doing scenes. Andrew and the team have spent years getting this right and putting together what is in fact an opera. The way that things normally work is that a show is rolled out worldwide over several years. Trying to get the original team together to do that can sometimes be problematic, so sometimes direction gets left to people who never had a hand in the original so sometimes motivations are lost in translation. We all know that if the first staging is good, subsequent productions get better and better because you learn shortcuts and staging improvements. Jerry and I felt if we could just get all these companies together in the same place at the same time we could impart some of the fervour associated with a brand new production and have that carried on to productions around the world,” O’Brien said. “We soon realised that finding actors for these roles was not going to be easy. These are daunting roles that are vocally punishing. In three or four years you can bet the conservatories will be turning out Christines and Phantoms by the score but in the meantime we decided to slow it down and roll out the show objectively”. Asked about the show hitting Australia, Lloyd Webber commented, “Australia has been very kind to Phantom over the years and we’ll be heading to Australia very soon. It won’t take long”.

What is rather unique about this production is the preparedness. The show is already completely cast and the original cast album is fully recorded and ready to be released on opening night. “I finished it about six weeks ago and I’m very happy,” says Lloyd Webber. The role of The Phantom has been given to the current West End incumbent Ramin Karimloo, whilst Christine will be played by Sierra Boggess who played the role of Christine to great acclaim in Las Vegas before heading to Broadway to star in The Little Mermaid. “We’re just honoured and looking forward to the challenge” Sierra said. Asked whether he was modeling his Phantom on any of his predecessors, Ramin commented that he had enjoyed finding his own version of the Phantom and was looking forward to developing the role further.

One thing is certain, the box office phones have already started ringing off the hook and tickets for this highly anticipated opening are already becoming scarce. Has Lloyd Webber created a second pot of theatrical gold? Only time will tell, but the signs are looking good.

Photo: Ramon Karimloo (R), who plays "The Phantom" and Sierra Boggess who plays "Christine" are seen with Andrew Lloyd Webber (L) at the global launch of his new production "Love Never Dies" at Her Majesty's Theatre in London, 08 October, 2009.