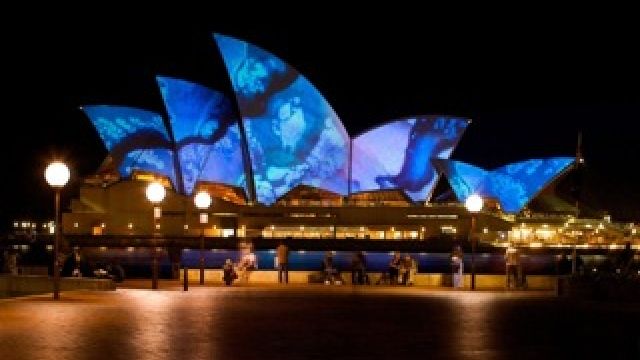 It is a symbol of Australia … a world heritage listed building visited each year by more than 7.5 million people. Yet beneath the glittering shells which adorn Sydney Harbour, the Sydney Opera House is literally beginning to fall apart.
Sydney Opera House Chief Executive Richard Evans is blunt.
“The choices are: shut the Opera Theatre, shut the theatre and do a band-aid job, or shut the theatre and do the full thing,“ he said.
“I hate to present it as a gun to someone’s head, but that is the reality,” he said. “At a certain point it will come down to health and safety and I will have to close the room. If I were the Premier, it is something I would want to avoid.”
I met Richard Evans in his office in the heart of the Sydney Opera House, naturally with a glorious view of the harbour. He was born in New Zealand and got into arts administration, first as a public relations consultant, then through management of the New Zealand puppet theatre, and later The Australian Ballet and Bell Shakespeare.
“I felt I knew this building, but nothing prepares you for the big desk. The Opera House is like a small city. I was astounded by the number of bosses I have,” he told me. “There are 1800 different performance events and functions a year, and 350,000 people turn up for a backstage tour.”
The heart of the challenge is the state of the Opera Theatre.
“The Opera Theatre is the busiest theatre on the planet. It runs every day of the year except Good Friday and Christmas Day, and has been running flat out for 36 years,” he said.
“Pieces of the backstage machinery - lifts, flying equipment, smoke extraction, and the air conditioning - are all wearing out. We are fast approaching the time of seeing failures. We have lost performances already and will continue to do so,” he said.
“It is a good way to get yourself on the front page of the New York Times, if the Sydney Opera House closes due to lack of care,” he said.Thirty million dollars a year is being spent to maintain the rest of the building, but the Opera Theatre has unique challenges.
Within a few years the air conditioning has to be upgraded, which means that the ceiling of the Opera Theatre will need to be ripped out.
“If you are talking about doing something like ripping out a lift, then this is something that has to be done at nights,” he said.
The program to upgrade the Sydney Opera House began in 2002. One of the major problems to be identified was in the orchestra pit, which traps all the music.
Conductor Richard Bonynge has described it as a disaster.
“We've had many casualties of people nearly going deaf in the pit. It's very dangerous, “ he told the ABC.
But rather than just repair the Opera Theatre, a grand plan was hatched to completely upgrade and renovate the facility. The thinking was if the Opera Theatre has to close, then why not do a complete revamp. The original architect Jørn Utzon was commissioned to draw up the plans. The aim - to have the magnificent exterior reflected on the inside - to fix the real impression that the Sydney Opera House gives, that it is a work of art on the outside but a big disappointment on the inside.
The exact look of the new Opera Theatre is still under wraps. Those who have seen it say it is magnificent, with a unique design that is just as geometrically interesting as the outside. One option is for the colours on the inside to reflect the outback.
On a practical level, the building work would see the Opera Theatre go further underground – taking its capacity to 1600 premium seats, instead of the current 1000 seats. It would open up more views to the harbour and silence many of the critics of the current building.
The Harvard Design magazine described the Sydney Opera House as a "tragedy in world architecture.” It noted that the city copped a 1400 per cent cost blow-out for a building unsuited to opera.
The London Review of Books describes the interiors as "a mess of tacky ideas reminiscent of a bingo hall in, say, Middlesbrough."

Of course Jørn Utzon’s original vision for the building was cut short when he was sacked. He never returned to Sydney and never saw the building, dieing in 2008. His original plan was for the larger Concert Hall to be the Opera Theatre.

The script was being written for the vast sum to be raised to re-do the Opera Theatre ‘properly’. The building work alone would cost 700 million dollars. When the costs to Opera Australia and the Australian Ballet of having to relocate for three years were taken into account, then not much change out of one billion dollars was expected. Richard Evans argues that the hefty price tag would be money well spent, and he thinks all Australians should help pay for it.

“The Opera House has contributed billions of dollars to the national economy. It is a world heritage listed site and is the symbol of our nation. It is the most recognised symbol of Australia - more than the Kangaroo,’ he said.
When Nathan Rees was the Premier of New South Wales, the Opera House had a supporter at the top of Government. The plan was for the New South Wales and Commonwealth Governments to jointly fund it. But as with other projects from the former Premier, poor preparation saw things stuffed up.
“Nathan made some comments about the project in the Daily Telegraph. He was surprised (it made the front page). The Prime Minister wasn’t ready for an approach through the press, and said the Federal Government was not interested at the present time,” he said.
Richard Evans is hopeful that State and Federal politicians will get together down the track to reconsider the project.
“There are always other priorities. There were other priorities when it was built. This building deserves to be done properly,” he said.
In the meantime the clock is still ticking away until things break down once and for all.
So what are the chances of the Opera House getting the cash?
A spokesperson for the New South Wales Minister of the Arts said that no decision had been made, and that ambitious building plans for the Opera House will have to be considered in light of all the Government's priorities.
Of course not everyone in the arts community endorses the program to upgrade the Opera Theatre.
Music Director Max Lambert told Stage Whispers that upgrading the Concert Hall should be a priority to make it suitable for opera.
"The accoustics are terrible. People drive in to the Opera House in their Lexus listening to magnificent sound, then sit down in the Concert Hall and struggle to hear what is going on. The sound can be OK in one row and awful a few rows back, " he said. "The Opera House is just piece of sculpture."

BUT THE SOFTWARE IS HUMMING ALONG NICELY.
While the hardware may be creaky, the Opera House appears to be hitting a purple patch in terms of the shows that go on inside and outside.
The strategy has been to be very choosy about what shows go on, and in many cases for the Opera House to be promoter or producer of its own shows.
“What has happened is that places like this have been like a hall for hire. We are now moving to a much more curated experience. Our role is to get the best and have consistent quality,” he said.
It has put some noses out of joint. Independent Theatre Producer Christine Dunstan says she is disappointed that the House Full sign has gone up.
“It is a tragedy that the Opera House is no longer available,” she told Stage Whispers.
Richard Evans is unapologetic.
“The Opera House was built to support the resident companies. They make up half our performances. For the other half we try to bring in a whole range of global cultural offerings,” he said. “This includes dance, rock’n’roll, comedy, ethno specific performances and a range of free events.”
“We changed to a more festival style of programming. One month is now designated for Dance. Our Vivid rock’n’roll festival saw the place teaming with young men, many of whom have never been to the Opera House before,” he said.
The biggest and boldest risk taken by the Opera House was staging a concert version of Jerry Springer the Opera.
“This was a piece we really wanted to do,” he said.
There were rumours around that it made a big loss for the Opera House and that the audiences had to be papered. The Annual General Report states that it sold 12,000 tickets, and Richard Evans admits that this didn’t do as well as expected.
Overall the capacity for events was above eighty percent, and the programming made a surplus last year. Richard Evans says the Opera House has a fraction of the budget which comparable venues get for programming.
Another innovation was a Festival of Dangerous Ideas. It saw everything from a Muslim man advocating polygamy to a speech from feminist Germaine Greer.
“The fact that something is on in the Opera House magnifies it and makes journalists want to be here and cover it,” he said.
The Festival of Dangerous Ideas will return. Perhaps one of the topics might be … is there a lazy billion dollars around for the Sydney Opera House?