Priscilla Queen of the Desert the Musical - North America Premiere 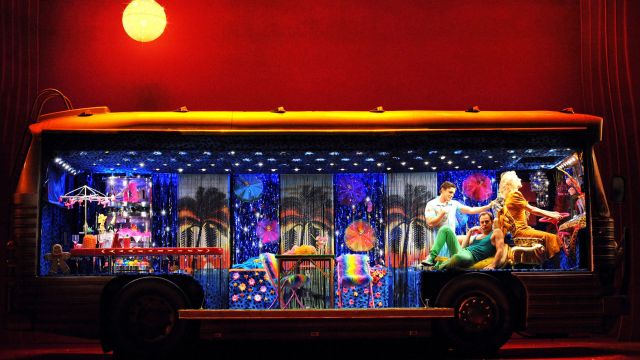 Olivier Award nominee Tony Sheldon (reprising his Australian and West End performance), Tony Award® nominee Will Simpson (Hair) and Nick Adams (La Cage aux Folles) will lead the cast of the pre-Broadway North American company of hit Australian Musical Priscilla Queen of the Desert the Musical. Written by Stephen Elliott and Allan Scott, directed by Simon Phillips and choreographed by Ross Coleman, will begin performances at The Princess of Wales Theatre for a pre-Broadway engagement, previewing from October 12.
The musical, which opened in Sydney in October 2006, subsequently played in Melbourne and New Zealand, before a return Sydney season from October to December 2010. The subsequent West End production, which opened in March 2009 at the Palace Theatre, continues its successful run.
Gold Logie Award winner Ray Meagher (Home and Away) joins the London cast as mechanic Bob from 30 September.
Adapted from the Academy Award® winning film, Priscilla Queen of the Desert the Musical is a heart-warming, uplifting adventure of three friends who hop aboard a battered bus searching for love and friendship in the middle of the Australian outback and end up finding more than they could ever have dreamed. With a dazzling array of outrageous costumes and featuring a score of dance-floor classics, Priscilla is a sensational journey to the heart of fabulous. Along with winning the Laurence Olivier Award for Best Costuming Design for Tim Chappel and Lizzy Gardner, the musical was also nominated for Best New Musical and received Four What’s On Stage 2010 Awards, including Best New Musical Award.
Previews begin October 12, 2010. Opens: October 26 - November 28.
Spring 2011 Broadway Opening - Theatre to be announced.
Peter Kemp