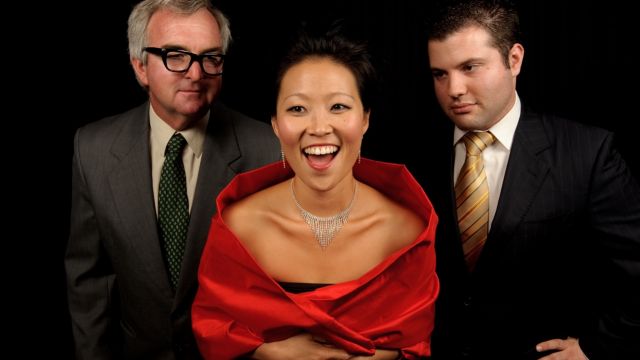 They both made their fortunes through a stroke of luck.
Lang Hancock became a mining magnate when his plane was blown off course and he stumbled upon some rich deposits of iron ore. Rose Lacson was in Perth when she noticed an advertisement to be Lang Hancock’s housekeeper.
So the lives of the multi-millionaire with a penchant for safari suits and his Filipina housekeeper became entwined.

Now a community theatre six hours south of Sydney is set to stage the world premiere of Prix D’Amour (the Price of Love).
It traces Rose’s roller coaster ride from poverty to money, property and a colourful lifestyle that eventually lands everyone in court.
When Rose heard about the musical she reacted with customary hyperbole, telling the West Australian newspaper in 2008 that she would sue for defamation.
“It would make a mockery out of me,” she said.
The writer and composer Paul Dion is not losing any sleep about the legal action. He says there is nothing defamatory in the musical, which is based on the book Rose by journalist and author Robert Wainwright.
“In fact I have made her into a heroine and she should be very pleased with that. She overcomes all sorts of odds to succeed and is very clever, outwitting lawyers,” he said.
He compares the musical to My Fair Lady both in format, with song and dance routines, and in terms of a rags-to-riches story.
“Rose’s character gets to sing big ballads and raunchy numbers in keeping with her extrovert character. Prix D’Amour embraces a variety of musical styles including Latin, rock and jazz,” he said.
“Rose and Lang Hancock’s meeting and subsequent marriage is fascinating. Many people will be familiar with Rose’s extravagant lifestyle, but Prix D’Amour also examines her background and covers universal themes of love, loss, greed and jealousy.”

Paul Dion was originally from Western Australia but has chosen The Spectrum Theatre in Merimbula, six hours south of Sydney, to stage the ‘way way off Broadway try out.’
“It’s to Spectrum’s credit that the group has had the courage to embrace this new work. They are supporting Australian theatrical development in a positive and practical way,” he said.
Elaine Waddell of the Spectrum Theatre Group is the director-choreographer for the show and said that as soon as she read the script she was keen to see Spectrum perform the work.
“It is exciting to be staging the first ever production of what may well become a major show on the musical theatre circuit,” Elaine said.

So was casting a problem, given the need for a dynamic lead who looks the part?
In what Paul Dion describes as a stroke of luck, he found Jennifer Hughes less than a kilometre from the theatre. She is of Korean origin but like Rose has an American accent.
“Jennifer is also a dancer and looks very sexy, so she is terrific,” he said.

Paul Dion has attracted interest in the work from some theatrical heavyweights including Graeme Murphy.
Richard Walsh, consultant publisher at Allen and Unwin Ltd, publishers of Rose, and a member of the Sydney Theatre Company board for eight years, commented: “Nothing like this has ever come out of this country before. This is full-blooded musical theatre at its most outrageous and extravagant, with a great range of moods from the soulful and romantic to the big ensemble pieces and the burlesque.”
Who knows, maybe even Rose Hancock will learn to embrace the musical like Shane Warne did with Shane Warne the Musical.

The season will run from Friday, July 30 to Saturday, August 14 at Twyford Hall, Merimbula, NSW.