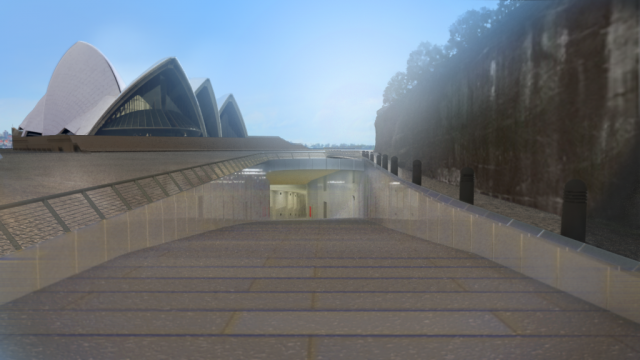 “Our Sydney Opera House is one of the most recognised buildings in the world and the upgrade is about securing its long-term future,” Premier Kristina Keneally said.
“The Sydney Opera House is the single master work of a recognised architectural genius – Jorn Utzon.
“It is unquestionably the most significant building of the 20th century – and we are going to keep it that way.”

The upgrade, supporting about 500 jobs and funded in this week’s NSW Budget, will focus on:
• Improving safety and security;
• Building a new lift for the opera theatre; and
• Removing trucks from the world-famous forecourt through the construction of an underground tunnel.

This means pedestrians will have safe and unimpeded access to one of the busiest tourist and cultural precincts in Australia.

The Sydney Opera House attracts more than 7.4 million visitors a year. It contributes more than $1 billion to the Australian economy through tourism, hospitality, travel and other activity – and supports more than 12,000 jobs.

In 2002, Mr Utzon said: “As time passes and needs change, it is natural to modify the building to suit the needs and technique of the day.”

In 2007, the cultural, heritage and architectural importance of the Sydney Opera House was recognised by its inclusion on the World Heritage List.

Under the historic upgrade – known as the Vehicle Access and Pedestrian Safety Project (VAPS):
• A new tunnel will be built from the bottom of Macquarie Street to a new underground loading dock – removing about 1,000 heavy vehicles movements a week from the forecourt and improving pedestrian safety;
• A new scenery platform lift to the existing Opera Theatre dock will be built underground to load and unload large and often cumbersome sets;
• Additional tunnels will connect the new underground loading dock to new lifts for food and beverage deliveries and deliveries to the concert hall and the three smaller theatres on the western side of the building; and
• The Bennelong Drain will be relocated as part of the project - the stormwater drain services the northern section of the Sydney CBD.

Premier Keneally joined the NSW Treasurer, Eric Roozendaal and Minister for the Arts Virginia Judge at the Sydney Opera House to make the formal announcement.

Construction is scheduled to commence at the Opera House in early 2011 with completion planned for mid-2013.

“This upgrade will revitalise the Sydney Opera House – visitors and tourists will be able to experience the precinct surrounds freely, safely and with an unobstructed view of the World Heritage-listed icon,” Ms Keneally said.

“Removing heavy vehicles from the pedestrian area will also extend the life of the Northern Broadwalk structures by up to 30 years thereby avoiding costly structural repairs in the short term.”

Mr Roozendaal said the strong financial position of the NSW Budget allows the Keneally Government to invest in this important upgrade work.

“This is a major investment for the state’s future – not just improving one of Australia’s most important icons but also securing the future of a major sector of our economy and the $1 billion it injects into the Australian economy every year,” Mr Roozendaal said.

“It’s timely that we invest in its future by making these improvements, ensuring that the building and its surroundings are safer and better for the thousands that work and visit there each day.
“The seven venues are in use 363 days a year and last year hosted 1.3 million paid attendances at 1,667 performances,” Minister Judge said.

There will be some operational impacts to the site whilst the works are underway however performances, guided tours, food and beverage and retail operations will continue throughout the duration of the project.

However, major upgrades to the Opera Theatre, discussed in the March issue of Stage Whispers, have been postponed for ten years (Read that article now on page 4 of News and Features on this website).