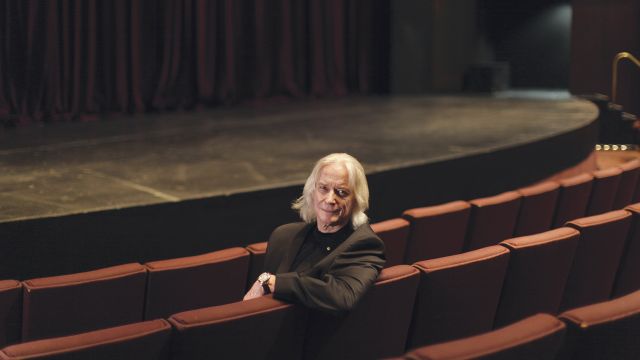 The arts in Australia lost one of its most fervent champions with the passing of Tony Gould, AM on March 10, 2020.

The founding Director of the Queensland Performing Arts Centre (QPAC), Tony was remembered by those who knew him well and worked with him as someone who was not only passionately supportive of the performing arts but also cared deeply for the people behind the art.

Following on from an already impressive career in the arts both as an actor and a respected arts administrator, Tony was appointed as Director of the yet-to-be-built $130 million QPAC in 1979 after a worldwide search. He opened QPAC in 1985 and under his 23-year tenure more than 8 million people visited QPAC for more than 12,000 performances. Tony also established the Brisbane Festival and was Artistic Director from 1996 – 2004.

“Tony was behind so much of what we enjoy as a vibrant arts and cultural landscape in Brisbane today,” he said.

“He had an incredible vision and knew that Queensland could play on the world stage. We could attract the world’s best performers to Brisbane, whilst also developing and celebrating Australian performers and creatives.

“Tony understood the power of the arts to make an impact and bring people together and laid a very strong foundation for QPAC to prioritise social justice programs in the performing arts, a thread that continues to run through our organisation today.

“His remarkable contribution to the arts is evident in the countless awards and accolades he received throughout his career and even into his retirement. It was a great privilege for us to acknowledge his impact on our industry with the naming of our exhibition space as the Tony Gould Gallery on his retirement in 2002.”

QPAC Producer Paul Dellit worked closely with Tony throughout his time at QPAC, as part of the Brisbane Festival, and into his patronage of the Actor’s and Entertainer’s Benevolent Fund (AEBF).

“For more than 40 years, Tony was one of the greatest champions of the arts in Queensland with a never-ending passion for supporting local artists and companies, First Nations artists and emerging artists,” he said.

“Even after he left QPAC, Tony remained committed to the industry he loved, serving on the AEBF committee for many years, the last ten as patron and in 2008 he was awarded the AEBF Lifetime Achievement Award.

“It was a joy to work alongside Tony and those who did so found his energy for and belief in the arts incredibly inspiring. He will long be remembered as the quintessential patron of the arts in Queensland.”

It was Tony Gould who laid the keystone of QPAC that remains at its heart today and that is the importance of community. Tony once reflected that “central to all aspects of planning was the conviction that the Centre needed to engage and interact with its community.”

Vale Tony Gould AM. He leaves behind an industry forever in his debt and richer for his selfless contribution over many years.

A memorial to celebrate the life of Tony Gould will be held at QPAC’s Concert Hall on Monday 23 March, 2020 at 1pm with a warm invitation extended to the arts industry and wider community to attend.

The Gould family welcomes tributes to be posted as comments on the Tony Gould Memorial Event page on QPAC’s Facebook page (facebook.com/atQPAC) and invites donations to AEBF (abfqld.com.au/donations/) in lieu of flowers.

This memorial will be ticketed but free of charge, to reserve seats contact QPAC’s Call Centre on 136 246 or via www.qpac.com.au from 5pm today (11 March).