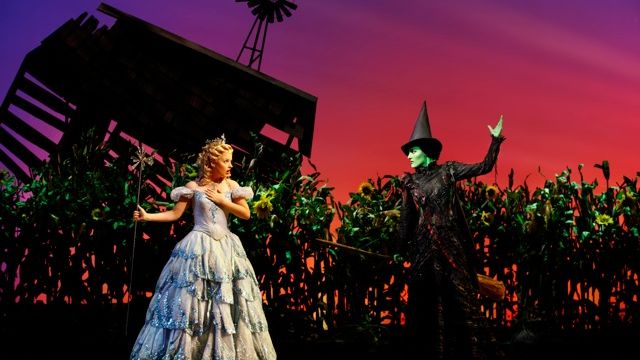 WICKED today celebrated a year of performances in Sydney – it opened on September 5, 2009 – and last week reached the milestone of $50,000,000 of ticket sales in Sydney. Since it opened at Sydney’s Capitol Theatre last year, well over 500,000 people have seen the show.

Australian Co-Producer of WICKED John Frost is thrilled that his production has reached this landmark. “Sydney audiences have fallen under the magical spell of WICKED. This show is a phenomenon, quite unlike any other musical, and appeals to people of all ages. And so many WICKED fans have come back time and time again to see the spectacle. I’d like to thank Sydney for taking WICKED to its heart. But anyone who hasn’t seen it only has a couple of weeks left to get their ticket to the musical of the decade.”

WICKED has achieved phenomenal success worldwide. Currently in its seventh year on Broadway, WICKED’s four North American and four international companies have cumulatively grossed $2 billion and have been seen by over 25 million people. Over five million people have seen WICKED on Broadway since it began performances in 2003, and the Broadway production has broken the house record at the Gershwin Theatre 20 times during the course of its run. It regularly grosses in excess of $1.6 million each week.

The London production of WICKED has played for nearly four years and nearly 1,700 performances. It is consistently the highest-grossing show in the West End. WICKED set the all-time record for highest weekly gross in West End history with the week ending December 31, 2006, taking in £873,020/$US1,694,000. Other productions of WICKED are currently playing in Osaka and Oberhausen, and a Dutch-language production of WICKED will open in 2011.

WICKED ends its run at Sydney’s Capitol Theatre on September 26 with no extension possible, and opens in Brisbane on January 11, 2011. Tickets available at ticketmaster.com.au or 1300 723 038.