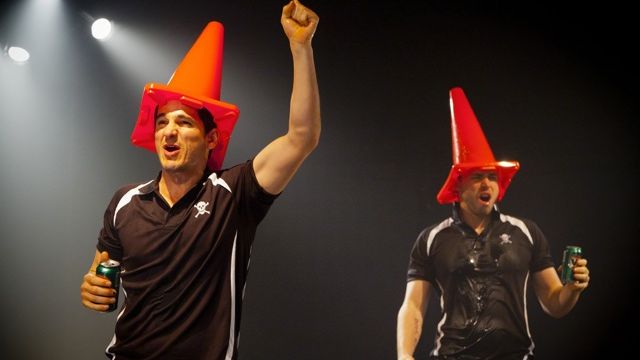 Why did I think I wouldn’t like 10,000 Beers? Perhaps it was the fact that I don’t really like sport, I’m not fussed on football players and I don’t know one team from the next. However, I was wildly entertained, madly laughing and thoroughly engaged at Darlinghurst Theatre last night on opening night of 10,000 Beers by Alex Broun.

The play is funny, incredibly physical, super slapstick-y and extremely well directed by Lee Lewis. Each scene moves smoothly and quickly into the next, there are no set changes so the actors rely on the super direction from Lewis. The four actors Gus Murray (Doug), Matt Zeremes (Len), Andrew Steel (Toby) and Anthony Taufa(Reed) have been chosen obviously on their looks but also for their ability to keep up to the demands of this highly physical and fast moving play.

This play tries to delve into some deep issues but it just doesn’t hit the mark. Just after a karaoke scene one player, Reed, starts to discuss some issues he has around his mother’s alcoholism but it never goes anywhere. Why? Another scene takes place in a bathroom where player Len questions Reed about why he never seems to get drunk like everyone else even though he drinks as much. You start to think that maybe there’s a secret he has, or maybe this will bring up some discussion later around the peer pressures of drinking in relation to football players and the team culture they have, but it doesn’t; the writer just doesn’t take us there.

There are some great scenes including karaoke scenes, a well-acted bus scene and a hilarious flirting scene over a pool table. There’s fights, nudity, lots of drinking and lots of can throwing. There really does appear to be 10,000 Beers. I kept thinking, where did they get all the cans from?

In the final 15 minutes of the show player Len does a monologue about the other players demoralizing player Toby in a hotel room. It’s as if at the last minute Broun wants to whack in something serious or important. Why can’t he just write comedy for comedy’s sake? I think that Broun has tried too hard to create issues or drum up a controversial side to the play. He’s got a gift for writing sharp dialogue and creating characters that are like caricatures who live up to strong stereotypes which makes the play funny. That’s all he needs to do.

The actors do an extremely good job keeping up the energy and enthusiasm for 70mins straight through. The stand out is Matt Zeremes, the core character that generates most of the hilarious moments; Anthony Taufa’s character Reed is no doubt the best-developed character, with a bit more depth and back-story that the other characters don’t seem to have. I don’t think Gus Murray is sufficiently well cast as Doug. This character is the captain of the team but also someone who has the ability to be completely obnoxious and disgustingly barbaric at the end and yet you just don’t get that edge from him. It’s as if he’s not ‘mean’ enough, we don’t dislike him enough to believe he could do that. Andrew Steel is well cast as Toby, with a smile like the Cheshire cat and a smug cheekiness that suits the part well but the part doesn’t really offer him much more than that to play with.

10,000 Beersis definitely worth a look, especially if you want a good laugh at the expense of footballers, but if you want something deeper the few cents worth of depth and the naked man at the end will not satisfy you.

Emma Bell is a writer, reviewer and interviewer and can be found at www.emmabell.com.au