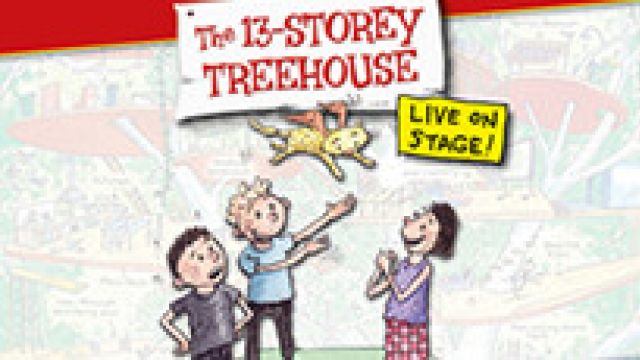 The hugely popular Griffiths and Denton Treehouse books are an anarchic treat for bright kids. There are now three of them — 13-Storey, 26-Storey, 39-Storey — featuring an outrageous, improvised fantasy world without rules, without plots. To playwright Richard Tulloch fell the seemingly impossible task of adapting the first of the series for the stage. He has nailed it.

Not only do the packed house of holidaying children sit attentively as the non-story rollicks along, they laugh, shout and, when invited, contribute their best monkey impressions.

In the books two creative blokes — writer Andy and illustrator Terry — make it all up as they gleefully go along. Here Andy (Mark Owen-Taylor) and Terry (Luke Joslin) arrive at the theatre thinking they have a week to invent and rehearse a play but find there’s an audience already in place and a stern Stage Manager (Sarah Woods) who insists that ‘the show must go on’. So they improvise, using any available bits and pieces and a huge leftover hamper of costumes and props.

There’s something of a junior Waiting For Godot on offer here. Waiting For Plotto? The concepts are quite adult, but the young audience are still and happy as the Andy/Terry double act introduce, among other things, an episode of Barky, The Barking Dog, an adventure with the mighty Super Finger, twelve flying yellow cats, and an encounter with a stage gorilla far more giant than King Kong.

The three performers are most appealing and the 60-minute show breezes along. Original director Julian Louis is not included in the foyer credits, though he’s featured on the company’s banners and website. Mark Thompson, designer of the excellent set and costumes, is now listed as director.