2 Cats Drove Into The Cuckoo's Nest 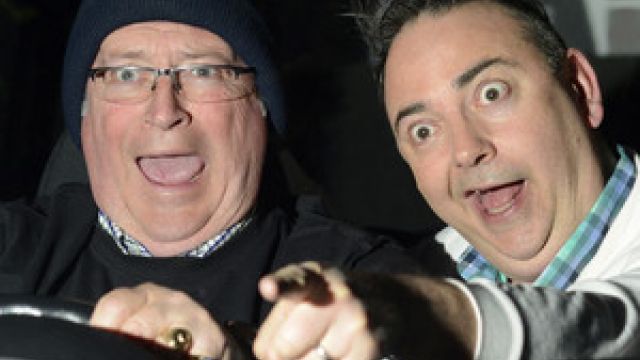 Ralph Hadzic and Steve Davis are not your average ‘cats’. Former ‘Fat Cat’ performer, Hadzic and Davis, aka ‘Mr Squiggle’, a name bestowed after the 2019 Fringe, have developed a one-hour show that is rather like a talking diary of memories, reminiscences and personal encounters.

Made up of two distinct parts that intersect when Davis and Hadzic head off to Los Angeles to interview and record a range of celebrities, it is a very different, warm and gently funny style of Fringe show.

The Histo venue works well for stand-up comedy and the props for this show are few. There is a three-seater car seat and a screen that is used to segue videos and shots of celebrities in and out of the patter. Opening night was peppered with ‘local celebrities and personalities’ including multi Logie award winner Anne Wills, who also makes a tongue in cheek, on screen appearance in the show where Davis and Hadzic use a ‘James Corden style’ car interview with celebrities who are encouraged to tell their stories, and comment on the elements of fame and celebrity.

Davis opens the show introducing the audience to the perils of the long haul flight to the USA, and the trials of sharing a room with Hadzic, a ‘dyed in the wool’ 21st century businessman who is hard wired to his electronic devices 24 hours each day. Davis sets the scene for their L.A. and New York encounters with the people (including Adelaide’s own Matt Gilbertson fresh from his America’s Got Talent triumph) and lifestyle of the impossibly rich and famous and he divulges his naïve efforts to fit in and understand those very people who are his quest to meet, understand and record. He has an energetic, lively and engaging style, using his face, eyes and personal energy to connect with the audience. His one-liners are quick and well planted as stand-up comedy should be.

Hadzic is the teller of stories. In his role as a ‘limo driver to the stars’, he has looked after many celebrities (with all of their foibles and demands), including Kenny Rogers (a lovely man we are told), Margo Robbie (in a recent visit to Adelaide), John Bon Jovi, Neil Sedaka, Bill Clinton and his unashamed favourite, Alicia May Moore, aka as Pink. He shares tales that assure us that many of these superstars are like Burt Bacharach, people who just want to sit by the beach and watch the waves come in.

This is a night of gentle fun that never resorts to coarse language or crude humour. It leaves you smiling about two chaps who went off to enjoy a grown up ‘boy’s own adventure’.