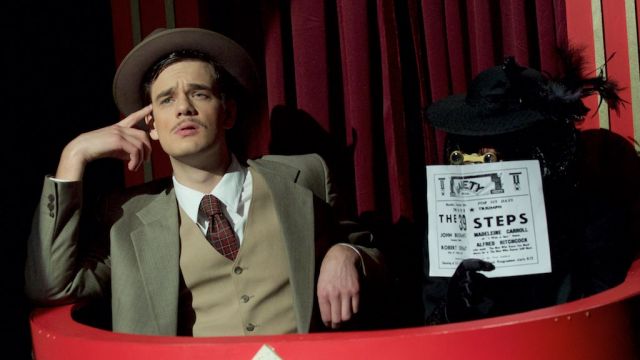 This is a dazzling production that does not fail in any instance to faithfully reproduce the excitement and suspense of the original Hitchcock film. All the parts are played by four performers whose ability to act as masters of disguise enables them to invoke the vast array of characters and locations that inhabit this filmic masterpiece.

The incredibly inventive use of sets and ingenious staging sustains a very credible cinematic quality as well as a jovial irony that both the film and Hitchcock are renowned for. The charming Richard Hannay (Ben Taylor) is catapulted into the centre of a case of international espionage and encounters the alluring secret agent Annabella. He romances the feisty Pamela and even entices the faithful famer’s wife, Margaret, all of whom are expertly played by Melody Spratley. Clown 1 (Brian Edmond) and Clown 2 (Kane Lach) combine slapstick comedy with magical costume and set changes that are wonderfully entertaining and often downright hilarious.

This production provides a vivid example of why the stage adaptation has been such a huge success on British and international stages, and the energetic and highly kinetic performances place it in the same league as other similarly popular shows such as The National Theatre’s One Man, Two Guvnors. The precision with which characters, such as Mr. Memory and the villainous Professor Jordan, are brought to life is only a sample of the incredible talent this show has on display.