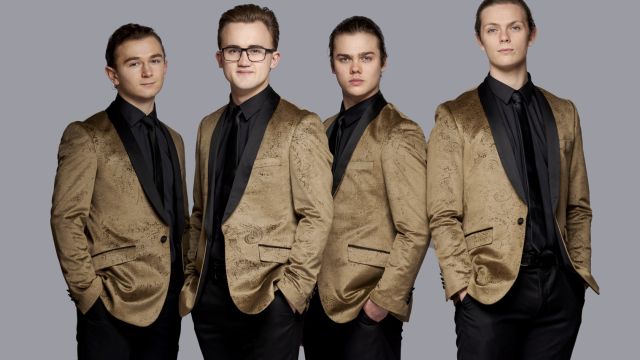 The 60 Four have bought back the boy band era with all its rich harmonies, classy tuxedoes and snappy choreography. These boys (all in their early 20s) quickly have the audience in the palm of their hands, all backed by a tight 7-piece band.

Playing to a packed house of all ages, mainly Baby Boomers, they soon have the audience clapping along, swaying, using their iPhones for a light show and dancing in the aisles. I even heard some screaming from the back.

The 60 Fouroriginally met in High School and under the guidance of Adelaide Fringe identity Michael Griffiths have been together ever since, however there has been one change of performer.

The show features music from Elvis, Frankie Valli & The Four Seasons, The Beatles, The Beach Boys, Simon & Garfunkel, The Monkees, Stevie Wonder and for the first time Dusty Springfield, The Supremes, Martha Reeves and more.

While working perfectly as a team, each contributes his own performance strength – Ben Francis (who also wrote the vocal arrangements) has a strong, confident falsetto, particularly in the Frankie Valli section, Kyle Hall brings Elvis back to life both vocally and with amazing leg work, Lachlan William’s infectious smile and strong voice enables him to sing any style with ease and Jack Conroy (clearly a favourite with the girls) nails Dusty Springfield.

What is impressive about this group is their support for each other, the way they work as one, effortlessly gliding from one song to another and featuring synchronised choreography rarely seen these days. It is obvious that there is real friendship between them and the way they can bounce off each other and the audience.

The Norwood Concert Hall is their first venue working with a band and what a band they are! A class act in their own right with arrangements by Marco Callisto and Emma Simpson-Smith, they change styles constantly and confidently.

Mosaic Audio Visual (lighting and sound) transform The Norwood Concert Hall with haze, brightly coloured moving head spots and a battery of speakers to ensure the boys look and sound their best.

Speaking to several audience members before the show and at interval, I realised that these boys have their own groupies of all ages, a tribute to their talent.

I couldn’t wipe the smile off my face throughout the show and for hours afterwards. The 60 Four are Adelaide’s boy band, but could own the stage anywhere in Australia.

A return to the best of 60s, executed brilliantly!