A Funny Thing Happened on the Way to the Forum by Stephen Sondheim, Burt Shevelove and Larry Gelbart 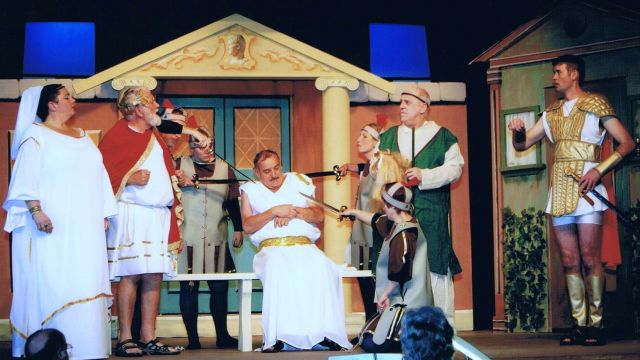 I have attended a number of productions by Broadford Amateur Theatre Society (BATS) and been constantly surprised at the array of talent. I enjoyed Funny Thing but felt this production was missing some of their stronger performers.
Michael Moloney played the slave Pseudolus straighter than usual and struggled on some top notes, but his comic timing was impeccable and he was a tower of strength. Gerry Vallence, who has impressed me in other shows, decided not to portray Hysterium as highly strung initially, which was a mistake. However he grew into the role and was suitably hysterical towards the end.
Pamela Halligan had the best voice in the production as Domina and her acting was strong, but a more dramatic voice is required for this role. The same for Rob Kemp as Miles Gloriosus, very pleasant voice and strong acting, but a much stronger voice is required for this larger-than-life character. Barry Withers portrayed a very randy hen-pecked husband off the leash.
As Hero, the younger lover, Brett Harvey gave us everything we could wish for with a pleasant singing voice and naive personality. Janelle Page as Philia captured the dizzy blonde very well, however her singing was disappointing.
I was surprised to see female foot soldiers and eunuchs, but they were loads of fun and worked very hard. The pace at the start was quite slow, but picked up, though there were unfortunate delays during the chase scene as characters exited on one side to reappear on the other. The small orchestra, seated at the back of the stage, tended to be a bit soft at times, but the sets and costumes were impressive.
However, the audience loved it and it was a very enjoyable evening.
Graham Ford