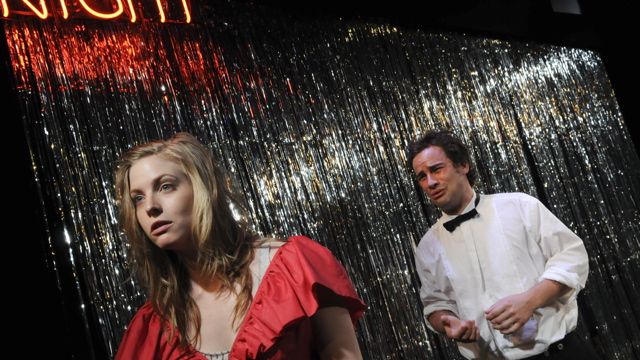 In the carnival like atmosphere there were some fine moments. My pick… Katherine Cullen as a longing Queen Titania giving a sensual rendition of Whitney Housten’s ‘I want to dance with somebody’….Tim Walter tinkling away at the casio keyboard and singing Leonard Cohen’s classic ballad, ‘Dance Me Till The End Of Love’…Puck, in frustration, dunking of a couple of the Athenians into a large red bucket filled with the magic love potion…At the close, Katherine Cullen, together with Tim Walter, looking rightly regal as the King and Queen enjoying the comic mayhem of the Mechanicals performance of Peter Quince’s ‘Pyramus and Thisbe’.

Charlie Garber played the plum role of Puck, the play’s prime mischief maker. Flack in his program notes, puts it succinctly when he says of Puck, “Puck creates the chaos, rescues everyone from it, and then demands applause’.

Applause, lots of it, Garber gets, as does the rest of the company, for a memorable night’s entertainment. Applause too goes to Alistair Watts for a set that works well in the intimate downstairs space. The front stage area is a grassed area where the action takes place, at the back is a curtain of strips of silver tinsel. The cast managed quick costume changes in the tiny space behind the curtain. Late in the play one of the cast opened the curtain to reveal a reflective ‘wall’, which with the bright lighting, leant a shimmering effect to the tinsel.