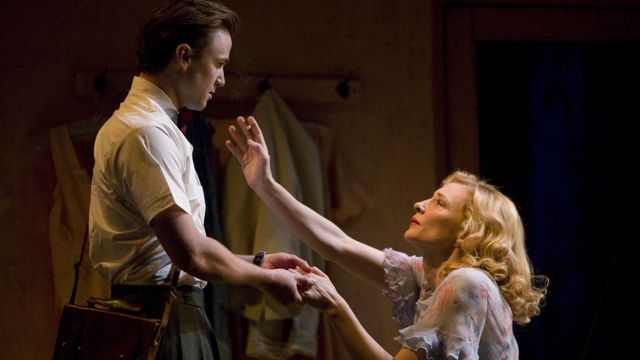 Cate Blanchett needed two stitches to the back of her head after a wayward radio struck her during a preview. It came while her character Blanche Dubois was playing music next to a poker game hosted by her sister’s husband Stanley Kowalski.
The Sydney Theatre Company wanted a production that was fresh and vital, but perhaps drawing blood was taking it a bit far.
On opening night the blocking had been adjusted. The STC’s superstar was standing well away from the radio as it was flung out the window. Her sparring partner was also more than a match for her in the acting department.
The beauty and vulnerability of Blanchett’s Dubois was perfectly foiled by Joel Edgerton’s brutal portrayal of Kowalski. The image of Marlon Brando’s performance in the movie adaptation is so strong that it has the potential to cast a shadow over any on stage performance. But Edgerton was absolutely convincing. His portrayal was so striking it’s sure to catch the eye of Producers when this production tours to the United States.
The tone for the play was set from the very first scene. The curtain opened to a dingy, cramped unit. The jittery over dressed southern belle was in a complete state of shock.
Like a moth caught in a light - Blanchett flittered around the stage, not relaxing until a later scene when she flirts with her brother-in-law. As the relationship between Blanche and Stanley goes from bad to worse the contrast between the two sisters grew more marked.
Robyn McLeavy as Stella Kowalski displayed the raw passion she felt for her husband, despite his brutal behaviour, by all but impaling herself on him.
Another powerful performance came from Tim Richards as Mitch the poker friend of Stanley Kowalski, who loved Blanche. His awkwardness and later despair shone through as Blanche Dubois unraveled.
The final scene brought great pathos. As she left for an asylum – aided by the kindness of a stranger – in this case a Doctor – Blanche looked utterly destroyed.
The performance prompted a thunderous ovation, which appeared to startle an emotional Blanchett.
It is so rare to see a performance where everything works.
This production is a sell out – it could run for months.
David Spicer