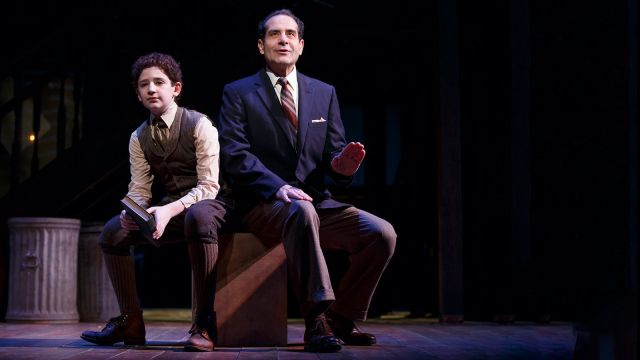 Play by James Lapine. Based on the autobiography by Moss Hart. Director: James Lapine. Lincoln Center At Home. 19 May – 3 July 2020

When I first read Act One, first published in 1959, I thought it was the most wonderful theatrical memoir I had ever read, and plenty of others agreed with me. Frank Rich called it ‘the greatest show biz book ever written’ and it stayed at Number 1 on the best-seller list for five months.

Moss Hart at the time was show-business royalty, having co-authored the comedies Once In a Lifetime, The Man Who Came to Dinner and You Can’t Take It With You with George S. Kaufman, collaborated on musicals with Irving Berlin, Cole Porter, Kurt Weill and Ira Gershwin, and directed the legendary Broadway premiere of My Fair Lady in 1956.

Act Onethe book concentrated on telling his story from his hard-scrabble years growing up in the Bronx, to working with Kaufman and creating his first hit Once In a Lifetime in 1930. James Lapine’s adaptation is faithful to the book but it falls far short of being great, despite some good performances, especially by Santino Fontana as the young playwright, and a marvelous three-tired set by Beowulf Boritt that won him a Tony Award. It’s long and the cast of 22 work hard diving in and out of costumes bringing all of the characters to life, but the closest it comes to some genuine pathos is the gradual bonding between the neophyte Hart and the notorious prickly Kaufman.

That’s not to say it’s not worth watching. It is. Tony Shalhoub plays three characters, Hart’s cockney father (with a bit of a dodgy accent), the older and wiser Hart, but the pick of them is his turn as the eccentric Kaufman. His picking fluff off the floor is priceless.

Andrea Martin also gets to play three roles - the first as the mean and selfish but theatre-loving Aunt who introduces the young Hart to the theatre, as Kaufman’s wife Beatrice, but is most effective as the animated literary agent Frieda Fishbein.

Dorothy Parker, Edna Ferber and Alexander Woolcott make an appearance at a cocktail party thrown by Beatrice Kaufman, which is lively but seems to have little to do with the main plot.

Veteran costume designer Jane Greenwood has recreated the twenties era with elegance, and the music with its piano-roll feel of ‘Manhattan’ and ‘Always’ help stitch it all together neatly.