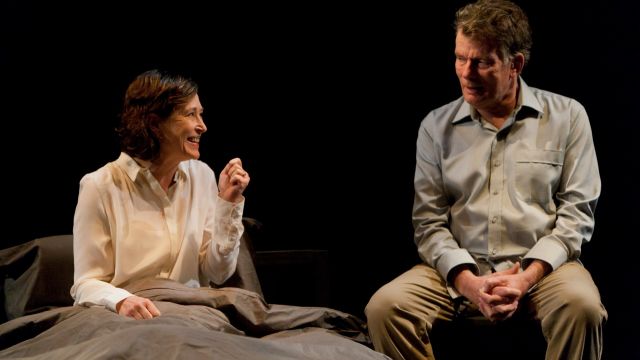 ‘I won’t ask if you enjoyed it,’ a friend said as I left the theatre.

A good way to start the conversation – this was a harrowing 85 minutes of theatre. In this tough, unrelenting, yet engrossing play, the close-to-home suburban setting, recognizable characters, and the intimacy of the space, amplify the themes and theatrical experience.

The subjects, terminal cancer and euthanasia, make for fierce drama, very human, yet relieved by the familiar comedy of long-term relationships and families. However, it draws empathy, to the point of tears, at its close. This is a fine play, written with such realistic, believable language, acute characterization and dramatic tension by Sam Holloway, and directed tautly and tellingly by Sam Strong. 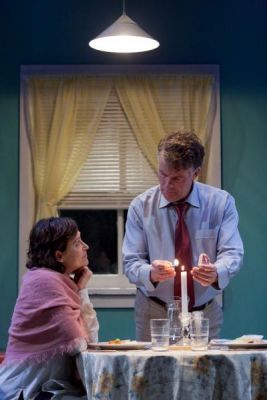 Russell Kiefel and Linda Cropper are the couple, Don and Pam. Aware of the imminent painful death she faces following the ultimate failure of cancer treatment, Pam has chosen her own time to die. The play starts after she has taken the tablets, then traces a path back through key moments as Pam persuades Don to assist her, and the associated emotional and legal minefields.

How would a partner respond to the circumstances of terminal cancer and their partner’s desire to end their life with dignity, before the painful end-stages. We all hope we would respond selflessly in the situation, but the uncomplicated, blokey character of Don is so engagingly drawn, that you may well share a gut connection with him.

After all, just how do you say goodbye to your life partner?

Linda Cropper’s Pam is convincing and determined, and if it is often Don’s journey that grabs us, her strong, composed journey, with the odd outburst along the way, is a powerful constant.

Victoria Lamb’s sparse, commonplace design, a single bed, and unrenovated kitchen, initially hidden by a gauze drape, anchored the production in suburbia, elevating it to a genuine tragedy of ordinary Australian lives. The entrance to the theatre, too had a detailed suburban familiarity. Lighting (Verity Hampson) and Sound (Kelly Ryall) blend into a focused, cohesive creative vision.

Griffin has become my must-see theatre in 2011, under the artistic direction of Sam Strong.