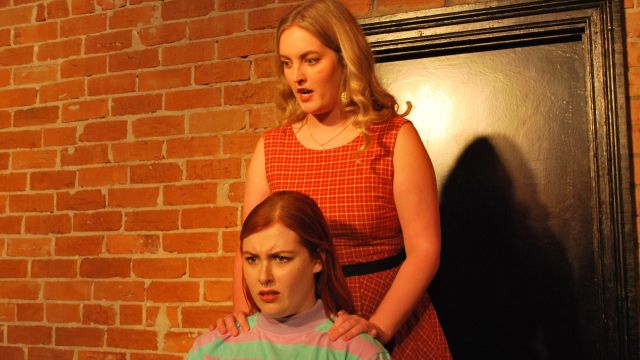 This feels a little like an extended University Revue sketch, and this large young cast, most or all of whom are university students, have bucket loads of enthusiasm, creating a series of increasingly bizarre audition scenarios, with some very wild characters. At the opening performance the premise became a little lost as the audience were not told exactly why these people were appearing - whether that was a skipped line, or a flaw in the script, I cannot say, but you were at a distinct advantage if you had read the Fringe World Blurb.

Ethan Milne and Cait Griffiths have strong camaraderie as central characters Hayden and Elliot, assisted by the unseen Chris (Calum Christie who is also handling sound and lights), the awkward Gwyneth (Alex Hutchings) and the impressively moustached handy-man Brock (T. Mutto Beilby). In a lovely piece of synchronicity Are You Kid-ing Me’s producer Samuel Addison appears as the potential backer for Hayden and Elliot’s venture.

All of the other performers play multiple roles, with Christian Dichiera particularly charming as an accordion toting Italian singer, Travis Koch nicely over-the-top as Jungle Julien, a scorpion handler, and Amber Anderson and Emily Bell working well together as Cassie and Jodi, a team where Cassie adds value to the parents’ party experience.

Lots of action and no time to get bored, but the script is a little undercooked and formulaic, Heaps of potential here and a company to keep an eye on as there is lots of potential for growth.