The Art of Coarse Acting 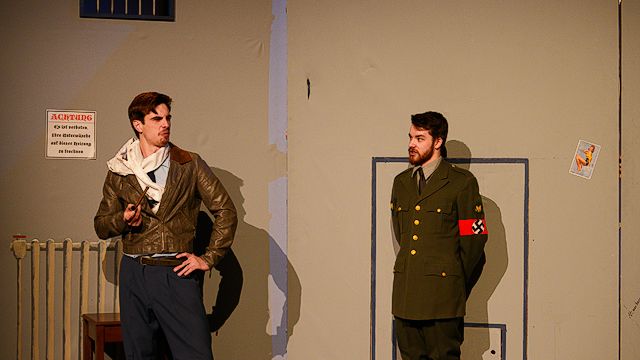 Apparently, a coarse actor is one who manages to “limp on both legs simultaneously”. The committed coarse actors in this production, who purportedly belong to the amateur troupe the Poon River Players, limp their hearts out through romantic drama, war drama, thriller, and murder mystery.  The six plays, supposedly serious, become comic through the buckling actors lurching from one mishap to the next on the equally buckling sets and stage furniture.  The emcee, heroically cheerful, artlessly flaps between catastrophes, willing audience excitement in anticipation of the next dazzling offering.

The physical comedy was nearly constant and well rehearsed, and, although many of the physical jokes would have been equally funny without repetition, the variety kept it interesting, as did the costumes, music, and sound effects.  Lighting was as bad — deliberately so — as it could be without inconveniencing anybody; and there was a good deal of disastrous timing to enjoy.

Some of the show’s funniest moments came from jokes built into the set and prop design, which obviously took a good deal of thought in order to create havoc at least once a day.  And spare a thought for the lady whose job it is to wash the blood from the clothing between performances.

The audience laughed its way through much of the entire collection.  You may well too.