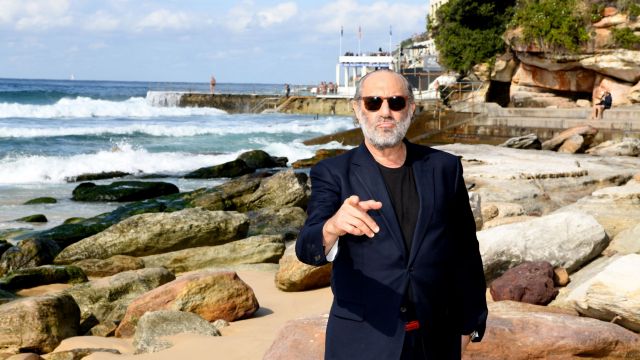 Like so many, I saw a number of Austen Tayshus shows in the 80’s in pubs and clubs where you would leave drenched in sweat and feeling like you had just done 9 rounds of cage wrestling with Andre the Giant and a Grizzly bear. The latest offering by Austen Tayshus at the Bondi Pavillion still leaves you battered and bruised but dying for more.

Austen Tayshus (aka Sandy Gutman) is a performer like no other. This is not a show comprised of mundane observational gags nor is it simply vulgar, crass humour.

This show is an unrelenting attack on everyone and everything because in the end its all funny and everyone is a target. With his trademark T-Shirt, sports coat, sneekers and surgically implanted sunglasses the audience has no idea what’s coming and whether they will make it to the end.

It is Gutman’s power, presence and ability to negotiate through his routine at lightning speed which sets him apart from the rest.  Pulverising the audience with gag after gag, whilst at the same time being able to humiliate audience members with ease, all combines for a night out of terror and uncontrollable laughter.

There were some pearls from his older work that cropped up here and there but these are classic routines and you can’t help but get drawn into the vortex of hysterical laughing all over again. Gutman’s mastery as a mimic really shows in this performance. Of course like every great comedian there is always a link to tragedy and Gutman’s experiences of vicarious suffering growing up as the child of Holocaust survivors feeds his humour with empowering routines of his pride in being Jewish and the persistent onslaught against anything German.

Interestingly there was a wide mix of ages in the audience, from teenagers to the elderly, yet the power of the laughs was equal.

During the show Gutman pays tribute to the greatness of the music he loved growing up, namely The Doors, and as Jim Morrison famously warned his audience “No one here gets out alive” – which pretty much sums up this show.

This is comedy at its best.

Not to be missed.