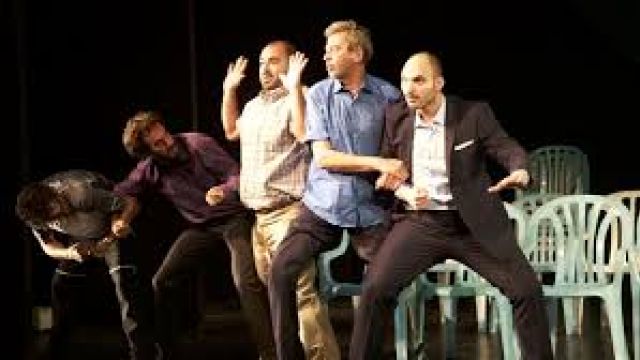 Azza is one of the most compelling pieces of theatre I have seen. It is like a well-structured piece of choreographed verse that, from the first minutes, lures you into one of the most poignant and painful times in the lives of those who love and are loved.

A capella chants are used as blessings, creating a trance-like state for the players and the audience, linking stories and changes of mood throughout the hour of the performance.

Azza, both the name of the play and the ritual, explores a mourning ritual that is one which takes place in both Christian and Muslim communities. Jewish people, with whom Palestine shares a border, also have similar complex mourning rituals and all of these cultures impact on this show.

Azza is the work of internationally acclaimed director Amir Nizar Zuabi and the Palestinian ShiberHur Theatre Company, which Zuabi founded in 2008. It is a very personal piece, drawn from the death of Zuabi’s father a year ago.

The performance explores a family and village grieving for a much-loved and revered man. The structure of the ritual is rigid, formal and adhered to and the play opens with ceremonial handshaking, chest tapping and condolence giving. The audience is thus introduced to the six simply dressed men who tell this story.

Each cleverly moves about, changing chairs, reappearing and moving on, letting the audience know that they represent the many mourners the row of white plastic chairs and forlorn stack of such chairs at the back of the stage will accommodate over the three days of mourning. Moods ebb and flow and frustration born of days of proximity guides the atmosphere and memories.

Stories of and blessings for the deceased are on the lips of all who come and go and each mourner has their anecdote, some funny, some confronting. My favourite was the donkey in the tree! Every story is short, but so evocative that you feel that you are there seeing the deceased’s much-loved family truck, a naked swim and the Sea of Galilee. Although there is no single way to get over death, these people have developed ways to make it easier and in this play there are stories where there is remembrance, there are tears and there is deep, unleashed sibling anger and guilt.

Khalifa Natour, an Israeli Palestinian actor is both one of the mourners and also, throughout the performance, weaves a recurring role as Death, inviting people to see their own mortality, saying, “Come follow me. Come to the underground.” He brings the smell of death and his performance is energetic, almost frenetic, and mesmerising.

Henry Andrawes and Amer Hlehel as the two bothers mourning their father, show us the bickering and envying, the remonstrating, and the accusing and denying that is involved when one child becomes the carer of the dying. It is heart-wrenchingly believable. They fight, they accuse, they forgive and teach us that shared lifetimes never loosen their grip on emotions. Sitting silently, almost back to back, we feel their isolation, their anger and mutual misery.

Adeeb Safadi, Amer Khalil and Wael Wakeem also give measured and powerful performances. They add their pieces skilfully to this carefully woven story as they contribute their stories, strengths and weaknesses to the Azza.

The staging is simple; a row and a stack of white plastic chairs, a gauzy canopy, together with side lighting that effectively creates moods, strategically lights faces and interactions and cleverly creates a sombre mood.

Finally, as it is almost irrelevant, the performance is entirely in Arabic. The audience has the benefit of supertitles in English, but this story, intriguingly, is so universal that language is no barrier.

Hurry to see it.