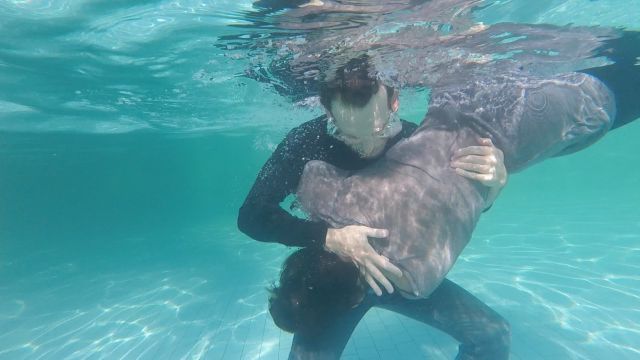 The Back Left project is the brain child of Professor and Head of Movement at California University Ezra LeBank, together with Mexican dancer and choreographer Isabel Aguerrebere. Their intent was to take our daily unconscious movements and flip them; thereby awakening our senses.

What originally started out as a show featuring two people took an unexpected turn last December when the romantically linked pair broke up. LeBank was left with the decision to either cancel his season at the Adelaide Fringe or modify the show to accommodate just himself. Whether this was the right decision is left for the audience to decide.

LeBank was centre stage greeting people as I entered the performing space.

Although the show has toured many times, the new version seemed under-rehearsed. One got the impression LeBank was winging it and while the concept was interesting, it never met its potential.

The use of video on the back wall was a welcome addition, providing colour and movement and performed by LeBank and Agurrebere. Clearly trained in their fields, they moved as though they were one unit.

Whilst LeBank communicated with the audience freely, his voice was sometimes drowned out by the backgound music. As he passed around a hot cup of tea, he motioned for the audience to breathe in the aroma. Next, he passed a plate of butter, urging us all to dip our fingers in, paying special attention to the texture. It was all a little odd and ambiguous.

LeBank is likeable and you find yourself eager for the show to succeed, but it falls short of the advertised blurb.