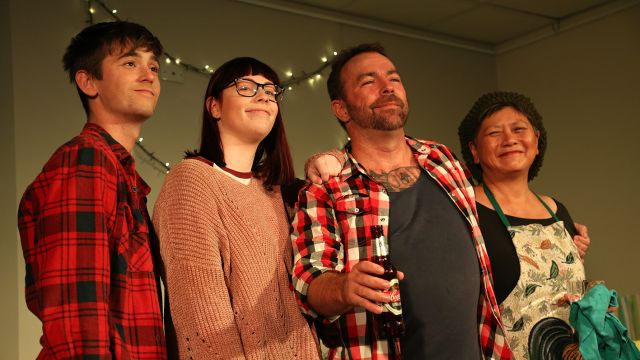 Who doesn’t like a good Aussie barbie? Only stuck up snobs that’s who! This Barbeque is a comedic look at the class system in our lucky country and whether or not money can buy happiness. According to the well-to-do matriarch of the McKenzies, Judith (Suze Harpur) it certainly can’t buy taste. Her character sneers down her nose at the Coopers, your friendly neighbourhood bogan lotto winners. What is it that old money hates so much about the nouveau riche anyway? Isn’t family, friendship and authenticity more important than money? What looks on the surface like a little bit of jingoistic fluff, actually poses many deeper questions that peer into the Australian psyche – how we see ourselves versus how we truly behave.

Daniel Baker plays all-round good bloke Colin Cooper with a warmth of spirit that rings true to life. He and loving wife Connie (Ann Leung) have won a fortune and moved to the fancy side of town, where they are trying to fit in with the affluent locals by hosting a neighbourhood barbeque. Few can stoop so low as to attend – aside from the aforementioned McKenzies, Colin’s mate Kevin (Andrew McArthur), and two accidental guests in the form of Mormon missionaries Jonathan (Taine Harding) and Leroy (Josh Welter).

Colin’s character couldn’t get more down to earth if you buried him. He’s fast friends with the Mormon gate crashers, welcoming to the neighbour who looks down on him and a supportive father to his daughters Kylie (Melita Sattler) and Krystal (Laura Perrett). He’s not sexist, racist, ageist or any other ‘ist’. If you’re a mate to him, he’s a mate to you. He’s the true egalitarian; a good, Aussie bloke. Comedic moments are waiting around every corner of the script. The Mormons get accidentally drunk on the wrong punch, Marion McKenzie (Hannan Mesmar) destined to marry into a wealth family, is caught making out with Leroy, upper class Len McKenzie (Roy Nunn) discovers a love of loud exhausts and muscle cars. It’s as though writer Daryl Peebles wants us to understand there is a better way to be Australian than the status quo, but he wants us to get there through a chuckle.

The farcical aspects aren’t too overplayed – under another director the drunk Mormons could have become ridiculous – Tereska Hart has the cast play it straight, which makes for better comedy in this instance. Teamwork is very strong in the production, the cast do well to elevate one another. The weaker players are buoyed by the stronger. Crew are on point too, especially apparent when lighting by James Auld and Shane Webb, switches in sync with a rapid fire, split screen scene change between the teenage girls’ talk and the middle age men gossiping at the pub.

In the end, there’s some gratifying comeuppance for the most inauthentic and arrogant characters. Perhaps therein lies the real Australian dream, that the heartless wealth-hoarders in our nation might get their comeuppance, but Brecht did warn us about theatre being the home of dreams.

There won’t be any political uprising inspired by Barbeque. It’s one of those ‘laugh now, think about the deeper issues later’ kind of experiences. The characters are recognisable and easy to relate to, making for some palatable light entertainment that’s still got brains. Good looking and intelligent? Yes it is. This play is a lovely lesson in how to treat others as equals and approach life with an open heart and mind.