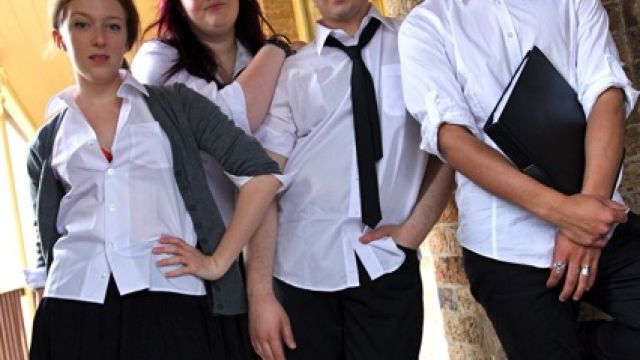 Bare’s story centres around two star-crossed (read: gay) teenaged lovers who attend a contemporary Private Catholic Boarding School – in and of itself an allegory of America’s repressed, right-wing upper class. One shakes one’s head at the notion that any play in the modern age still needs to deal with themes with sexual repression. Lord knows that any Sydney production would be preaching to the converted! Having said that, this heart-rending story, with its Shakespearean overtones, makes it an ideal production to tour high-schools as an educational talking point, raising issues of sexuality, prejudice, drug-abuse, self awareness, bullying and self esteem. This production was amazingly slick in spite of the major obstacles it obviously had to overcome. I’m not sure what the problem was, but the sound-system simply seemed inadequate to do justice to the fabulous vocals. Audio problems persisted throughout the performance – but the exuberant youth cast soldiered on brilliantly. The stage was very restrictive, with entrances and exits via either side of a curtain backdrop proving awkward; diluting the dramatic impact of some scenes. Festival rules dictate that no show can go beyond the two hour mark, so the interval was dropped. Considering this production only bumped in that morning and had endured three run-throughs during the day, it’s astounding that the cast maintained such a high level of energy and focus from the first song to the last. Crisp and concise choreography made the best possible use of the space, however, during some of the more dramatic, static moments; some of the direction did not. It’s hard to single anyone out from the leading cast but I feel compelled to mention the impressive acting skills of Jenni Little as Ivy, and Monique Donath did exceptionally well to draw the audience in with her compelling rendition of ‘Warning’ – despite being placed way upstage, with her microphone cutting in and out continually. It’s a poignant, yet wild, rollicking ride of a production, with a first-rate cast and great music…which screamed out for better facilities. It would be nice to see most of this cast return in a full scale, professional production.