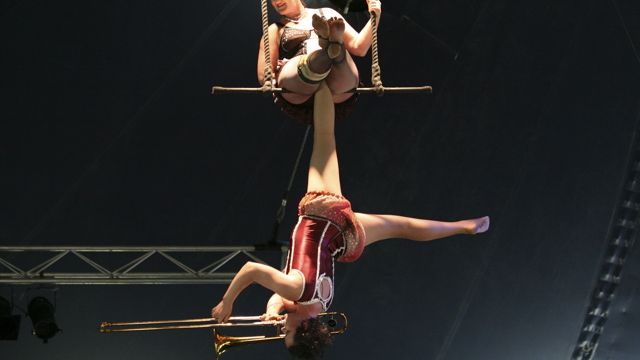 Anticipate smiling all evening, your smile broadening to laughter and heightening to awe.

After numerous visits, I still fancy running away and joining Circus Oz, as I did when I first delighted at the aerial magic they created above my head at Sydney’s long lost Paris Theatre, three decades ago.

But forget nostalgia! While a new generation of performers retains the Circus Oz spirit, and nods to its traditions, they tell new stories with their own mix of skills.

There are highlights galore, so I’ll share just a few of my favourite moments.

Trombonist Shannon Barnett plays, suspended upside down, her high-heeled ankle clenched between the thighs of strong woman Mel Fyfe on a trapeze.

Fyfe’s interaction with short statured performer, Emma J. Hawkins, is a delightful thread, their contrasting sizes melding delightfully with their shared repartee throughout. Nowhere is it better exemplified than a bed of nails routine - Fyfe is actually the filling in a sandwich of nails - with Hawkins gleefully tap-dancing on the upper layer.

On stilts, Hawkins’ send-up of classical ballet conventions, and the ensuing fun, is also hard to beat.

Eli Green, in a costume embodying the show's title, begins the evening as m.c. / events co-ordinator, later becoming the bemused bride, but it is her control of an impossible number of rotating hoops that dazzles.

A return of Circus Oz’s well-loved Kangaroo costumes, with the associated tumbling and sight gags, is Barely Contained’s sole nod to the animal acts of traditional circus; one tradition eschewed by Circus Oz from its origins.

As a finale, the entire versatile troupe transforms into a traditionally uniformed circus band, as strong-woman Fyfe performs one final astonishing feat to cap off the evening, balancing a good proportion of the company aloft using her powerful legs.

Barely Contained plays under the air-conditioned Big Top at Darling Harbour as part of the Sydney Festival until January 26, festival hopping to Adelaide from February 24 to March 14.