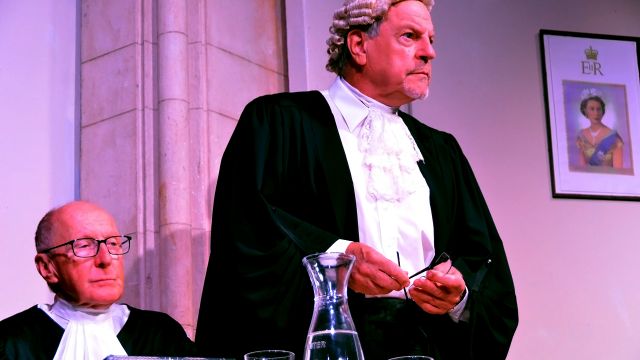 Best known for his fast-moving, critically acclaimed thriller novels, Jeffrey Archer has written three plays, two of which have a courtroom setting, both actively involving the audience in deciding innocence or guilt. Beyond Reasonable Doubt is the first, having had a lengthy London run and countless world-wide performances since.

St Jude’s Players, in their 70th year, are an excellent example of fine community theatre. Patrons are welcomed like old friends by an enthusiastic team of volunteers and are treated rather more like guests. Many of the company’s loyal patrons are older, and for this reason, Archer’s play may well ‘strike a chord’ with people who remember the start of the debates about one of the challenging issues that this play addresses. The program is clear that sharing too much will be a ‘spoiler’, and therefore, seeing the play will solve this mystery for those who are curious.

Written in 1987, Archer has structured the play so that the trial of the accused creates the first act. This is a series of often seemingly unlinked ‘vignettes’ where witnesses tell their version of the events leading to the poisoning death of Lady Millicent Metcalf, played in Act 2 by the ever relatable Joanne St Clair.

Witnesses include the housekeeper, played by Julie Quick. She appears in both acts and presents as appropriately anxious and somewhat as a seeker of revenge, whilst David Rapkin portrays a befuddled, easily rattled and somewhat incompetent Doctor. 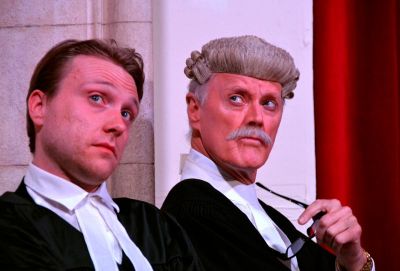 David Lockwood, as the Judge, appears in both acts and is serious and measured in managing the court and briefing us, the audience, about the importance of decisions being made on the basis of ‘beyond reasonable doubt.’ This is the play’s underlying message and all events revolve around this legal tenet.

Act 2 is made up of five short scenes and the audience is taken back in time, with a few reminders from the trial, to show the jury (us, the audience), what really happened. The last scene tells all. Sir David and Lady Metcalf’s home is deftly created by moving and rotating parts of the Act 1 courtroom, thus allowing the fullest use of the stage. Lady Metcalf, the victim, joins the story and much of the human and vulnerable parts of the narrative are told through her interactions with several characters, including her husband, who is charged with the murder.

The stand out performance, although sadly limited almost exclusively to the first act, is by Brian Knott as Mr. Anthony Blair-Booth QC. He is commanding, confident, bombastic and believable as a skilled ‘silk’, in his element prosecuting an old foe, Sir David Metcalf QC, played by Andrew Horwood.

Knott’s accent is consistent and appropriate for a well-educated professional man, and his use of pause and emphasis makes his style almost naturalistic, and at times, dangerously conversational. Whilst an accent coach was used for cast members, elimination of the Australian ‘twang’ is still developing for some.

Andrew Horwood undertakes the role of both an accused murderer, and in contrast, a doting husband. His work in the second act supporting a dying wife is particularly challenging as in Act one, the audience is presented with much evidence that makes us believe he is a felon. Horwood works well with St Claire and their banter, as a married couple is convincing, and builds sympathy for a man who struggles to cope with his wife’s terminal illness. Together, they handle her death scene well and sensitively. 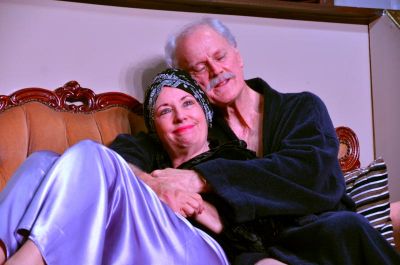 Technically, this show could be further refined. Costuming does not obviously support the look of the era and there are idiosyncrasies like the wearing of sports shoes with a glamorous dinner suit and the lack of a tie by an actor portraying a Peer of the Realm, in court.

Lighting by Leigh Wheatley is stark, with shadows and dark spots at the back of the stage. It also lacks warmth which would have added to the poignancy and intimacy in Act 2. Sound is carefully chosen and is used to underscore some important moments, adding a television drama-like feel to those scenes.

The set, designed by Don Oakley, uses the small St Jude’s stage thoughtfully, creating two totally different playing areas in each of the two acts. Set in the historic Old Bailey, the courtroom looks somewhat like an IKEA flat-pack (though with parts cleverly re-used in Act 2) and lacks the believability and grandeur of the courtroom portrayed. A significant oversight is created by the crowded courtroom entry. This forces witnesses who would never do this in a real court, to meet face to face.

St Jude’s and Vicky Horwood are to be congratulated on presenting this much performed piece that explores one of our most current issues in an interesting and different way. 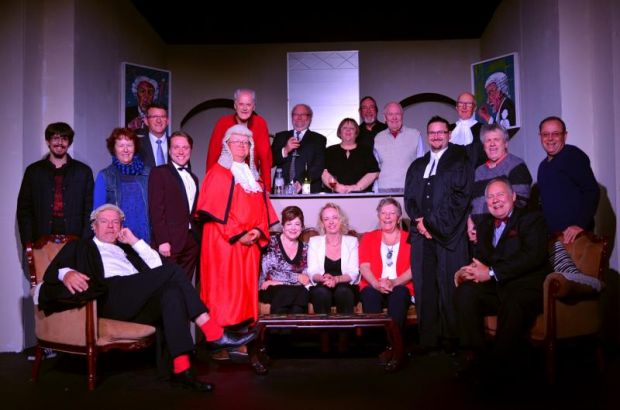