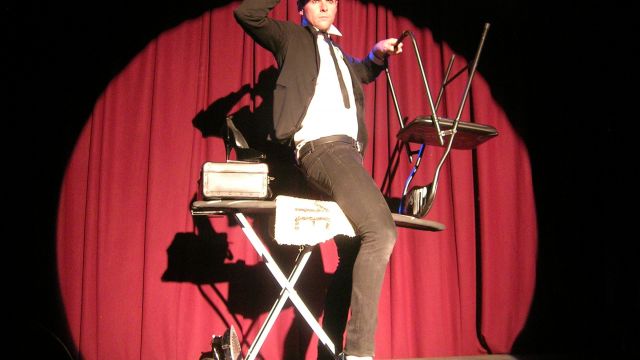 These are actually independent vaudeville or burlesque acts. They complement each other in style, to make before-and-after halves of a 90 minute show.

Tigerlil, the Queen of Highgate Hill, was on first. Her specialties: funny walks; whip cracking; hoop work; tumbling; costuming ─ from grand to minimal ─ and the audience favourite, puppetry. If you are short-sighted, sit near the front. This charming little fellow will winkle his way into your heart. She works with various combinations of these at the same time, and what’s funny is not what she does, but where and how she falls short on the journey to achieving her goal. 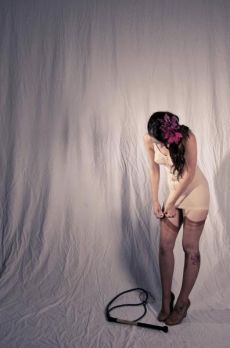 It’s shock of recognition that cracks up the audience. Writers who’ve taken a course in comedy structure will have come across that. For everyone else, it hits the funny bone anyway.

So, on to The Birdmann who has a name (that’s it!) and who talks his way in the third person through the ‘events’ that comprise his act. His shticks are: a bizarre hairdo, too-tight formal costume, clever repartee, slight-of-hand tricks, juggling cupcakes, ability to control his heart rate to zero, obsession with turning back time, and his need for love. His stand-up comedy with demonstrations has much in common with Tigerlil’s style: it’s parody of popular entertainments as an art form.