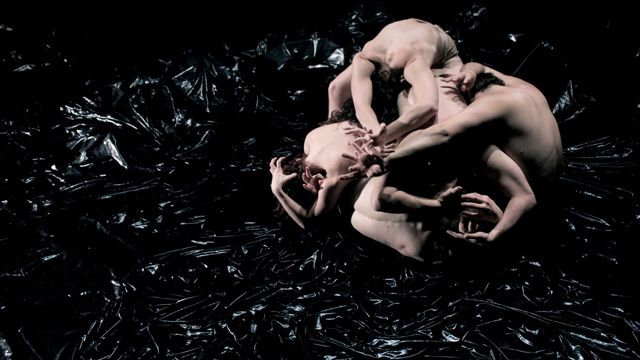 Dance, perhaps more than any other creative discipline, has to work exceptionally hard to define, and maintain, its contemporary relevance in an increasingly cynical, impatient, overloaded and (dis)connected society: such is the burden of expectation and borrowed observation that increasingly litters the everyday dialogue throughout Melbourne's currently unrestrained creative democracy.

Black Marrow opens against Alexandra Mein's intriguingly spare vision of a post-apocalyptic wasteland (simply, if later counter-intuitively, lit by Mr Pajanti): huge sheets of black plastic providing an instantly recognisable garbage dump. Gradually, shape-shifting bodies scurry underneath what turns out to be a huge piece of black latex covering the stage. Grunting, heaving, fearful and desperate angular 'creatures' meet centrestage before scurrying off to the periphery again. It is a masterstroke: and in a spine-tingling coup de theatre, the near-naked dancers are revealed to us as the entire black latex floor covering is stripped from the stage and out of sight in a heartbeat.

I hold my breath for the stunning pieces of isolation (I have never seen shoulder blades isolated to such powerful effect – at one with Mr Frost's otherwise indecisive score), and some superb work on the theme of contorted mutation with the dancers' heads tucked forward, somehow completely out of sight between their shoulders; as their bodies morph, entwine and pulsate across almost every inch of the stage. The artistry and execution is exceptional: and it is a scintillating promise of what is to come.

Sadly, it is a promise that is soon broken.

Almost immediately, and with then only rare respite, Black Marrow collapses and falls apart under the weight of its clichés (think carnivalesque, ringleader, circus, toy dinosaurs, Mythology for Preschoolers) and is reduced to a twee playground aesthetic: even though it is entirely lacking in a child's unquestionable and fearless curiousity about how the end of our world will look, feel and sound. For the rest of its 60 minutes running time, it becomes increasingly stage-bound – resulting in a strangely one dimensional landscape.

The exceptions are the brilliance of the thrilling 'last gasp' full body extensions from the floor against the repetitious beeps of a heart-monitoring machine, and the fights against flat-lining that accentuate the dancers' ultimate physical prowess and powerful physical fluidity. Their floorwork is exceptional ... which only highlights the fact that there is little further exploration of full extension: especially at the end, when covered in black oil (yes, an environmental message delivered with the subtly of a fire-hydrant), they only stand to collapse again, even if it is into magnificent Pompeii-inspired frozen corpses, recoiling in horror from the pain of their demise. Minutes from the end, it is a frustratingly fleeting, powerful whiff of all that might have been.

The Spoken Word in the context of Dance in performance has always been a complicated affair, and in this case, it results in a kind of ill-considered, pseudo homoerotic, egocentric and indulgent monologue that only serves to fail the physical vocabulary that wants to fuel the work: and the less said about the grotesquely misogynist birthing sequence … and a silly machine sequence (that immediately reminded me of my own Contemporary Dance classes at Rusden Drama College in 1980-something), the better.

Ultimately tentative, earnest and essentially unfulfilling, Black Marrow delivers little of the thought-provoking, edge-of-the-seat, incisive choreographic adventure we expect from Melbourne's premiere dance company. The dancers are faultless and meet the precise physical demands of the work's rare and momentary highpoints to absolute perfection. This only makes the extent to which they are starved of the raw, truthful creative exhaustion and repetition (to which the work makes what turns out to be spurious claims in the program) even more obvious. And bitterly disappointing.