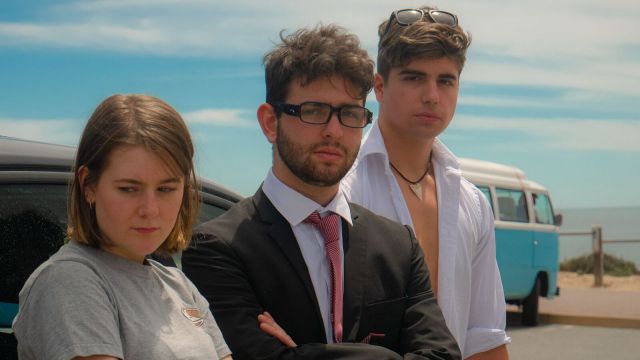 What would you do for your friend? Your mate? Your family? Blackrock asks these questions in Nick Enright’s 1990s play about male behaviours after a teenage girl is raped and killed. Unfortunately, Jack Cummin’s production doesn’t really help us with the answers.

It starts well, the brooding teenage figure of Jared (played by the director), sitting on a rock, looking out to sea. The language of Jared and his cousin defines the context for the next fifty minutes: this is a boiling pot of uncertain masculinity, where the boys rule, right?

The set is a triptych of sofa, rock and dining table, and is used well, with basic lighting cues that serve only to punctuate the changes in scene. Props are no more than a surfboard or a beer cup, but that should be sufficient given the charge is in the characters in this story.

And Cummins is great as Jared: his struggle with his emerging man real.

Miraede Bhatia’s Tiffany, the taken-for-granted sometimes girlfriend of bad boy Ricko, draws her character well, but the others are two-dimensional. There are some good actors here, but they’re not given enough space or time to breathe life and individuality into their performances.

The use of young performers in the adult roles is puzzling: surely the message here is that the generation is different yet the behaviour and attitudes aren’t? That’s lost in the homogenisation of the cast.

There is some maturity in Jade Ryles’s Diane, Jared’s mother, and she does well in articulating how her personal challenges have to compete with those of her evolving son – she creates and sustains the most emotional moment towards the end of the play.

Whilst this was written and set in the 1990s, the toxic masculinity and mateship on display here is just as relevant today; it’s courageous for the young Cummins to direct this, and it appears that he wanted to give a brighter light to the women in this story – the teenage girls and the mothers who are directly and indirectly impacted by every act of the boys and men – yet this piece needs shade to achieve that.

There’s only a gentle swell in this surf story: a lot of anger and indignation, but little in resolution or redemption.