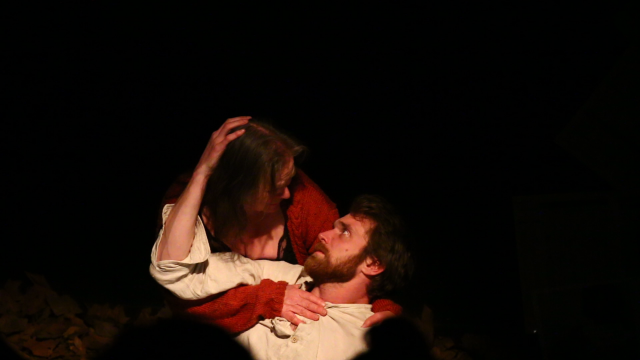 Lynn Preston has dug deep and gone to dark places in the long gestation of her play.  Working for a time with the very experienced Sue Ingleton, she has made a text that is dense and allusive, filled with vivid images, and strongly suggestive while avoiding banal specifics.  It is remarkable how much story and emotion she packs into her sixty or seventy minutes.  This is poetic non-naturalistic theatre realised with intense performances and skilled, risk-taking direction by Dirk Hoult, his sound designer Gemma Notarpietro and intricate lighting from Jason Crick.

The play looks, as Ms Preston says in her program note, at ‘the dark side of sexuality’ – about which it is challengingly direct and frank.  It is also about guilt and the burdens of guilt that occasion intense anguish.  Her characters are a mining town prostitute (Verity Higgins), and a young man (Jack Currie) bowed down with guilt, on the edge of madness as he tries to communicate with the dead.  Her story, as she tells it, has that familiar ambiguity and ambivalence of the sex worker: how she loves, how she revels in the pleasures of sex and much of that pleasure is in the power she holds over her multiple clients: they are at her mercy, they are helpless.  But these claims are delivered by Ms Higgins with such energy and conviction that we are almost convinced.  Her character is – or was – frequently pregnant, but she went on – it was what she did – until too old, just shagged out.  And what is established is a dichotomy between love and sex, and love and its physical expression. We might guess from the title that the young man might be her son, the result of one of those pregnancies, but his story and hers are for some time quite separate – the characters do not interact, do not even acknowledge each other for well over half the play.  His story is inward, driven by his guilt and his begging for forgiveness, and his failure as a ‘man’, while hers is more directly a fierce and proud narrative assertion directed to the audience.  Yet we anticipate their stories intersecting with a growing dread as his story becomes more specific and hers becomes sadder, more regretful and more ambiguous.  Hers covers a long stretch of time; his moves between a mine shaft and a gaol cell – a bold move by Ms Preston but made clear by Mr Currie’s performance and Mr Hoult’s direction.  We know something is seriously wrong for the young man.  His area of The Burrow’s tiny playing space is plastered with sensational tabloid headlines upon which are written such things as GIRL MISSING.

I’ll admit to some uneasiness with theatre in which the greater burden is carried by monologue (something quite prevalent in contemporary Australian playwrighting): I’d rather, most of the time, to be shown rather than told.  Here Ms Preston’s writing is powerful, but much of her play is monologue – as if she has so much to say and so prefers to get it across by direct address rather than by interaction between her characters.  Despite the power of Ms Higgins’ performance – she is excellent – we are being told so much that we almost wonder if this might work better as prose or poetic fiction rather than drama.  In any case – and perhaps it is a matter of performance, or the fact that she has a narrative to tell – Ms Higgins’ character seems the better written.  With no disrespect whatever to Mr Currie, clearly a fine actor, we wonder if he might be too well-spoken and too beautiful to be a fuck-up middle son of a prostitute in a country mining town.

Nevertheless, Mr Hoult’s very inventive direction does make drama of this text and at the climax when the stories collide and interweave, the avoided reality is revealed and anguish seems to erupt on stage, we are wrung out, some in the audience are in tears and we do experience a sort of catharsis (in the original sense).