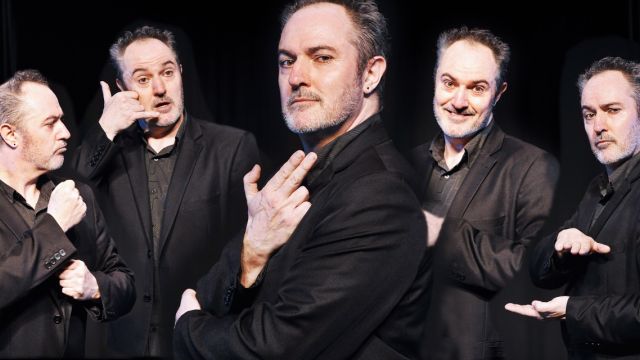 Bond- An unauthorised parody, at the Bakehouse Theatre, is written and performed by the extremely talented Gavin Robertson and directed by Nicholas Collett. This show would be one of my ‘picks of the Fringe’. It is not just for the Bond lovers but for all lovers of sharp, clever, witty theatre and mime.  This is a wonderfully enjoyable hour and has the audience riveted to every word and action.

Commencing with the classic Bond opening, Robertson cleverly recreates every Bond girl ‘sexy opening sequence’ and mandatory ‘gunshot down the barrel’ scene. It is brilliant. He oozes his way about the stage using only three metal door frames as props and prepares us for a ride in which we are certainly ‘shaken and stirred’.

These three metal frames are the only set and evolve into many forms- creating tables, bars, bicycles, security gates at airports, a grave, a truck, a canoe and my absolute favourite- the road for one of the wackiest car chase scenes you will ever see!

Robertson effortlessly flips between all of the characters he plays, vocally and physically. His many accents are perfect, and he is the essence of all things Bond.  He has nailed the elements of these much-loved films and in particular, captures their lame jokes, unbelievable plot twists and ability to jump from one location to another with ease. 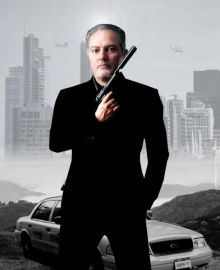 After the opening sequence, we meet an aging Bond, called back into service by to solve a poem clue to save world from a nuclear device at LAX. Sounds like an implausible plot? Ummmm have you ever really thought about the real Bond movie plots?

Robertson takes a stab also at Bond’s ability to pilot anything- in this case- cars, cycles, motorbikes and hilariously – a space shuttle! He makes fun of Bond’s ability to survive every life- threatening situation- be it sharks, lasers, bombs and even being locked in a container slowly filling with water- this scene is hilarious.

He plays so many characters it could be difficult to keep track, but such is the genius of Robertson’s movement and vocal ability we believe every moment. We meet Moneypenny, M, Q, Le Chiffre, the Bond girl ‘Honey Dew Melons” (I’ll leave that there) and spend a fleeting moment with Sean Connery. A highlight is meeting the real baddie of the piece, complete with cat!

Roberston is also a master of mime - clearly showing deep training in this area. His lack of props is certainly made up for in the imaginary ones he creates with his hands.

The sound and lighting in this show is impeccable. Every movement is synced with music and lighting changes and certainly give a sense of place, as we hurtle around the world (as Bond does) to London, Paris, the Caribbean, LA and Space!

This is a very clever show- suitable for any age and should not be missed. The audience loved it and you will too. Rush and get a ticket!