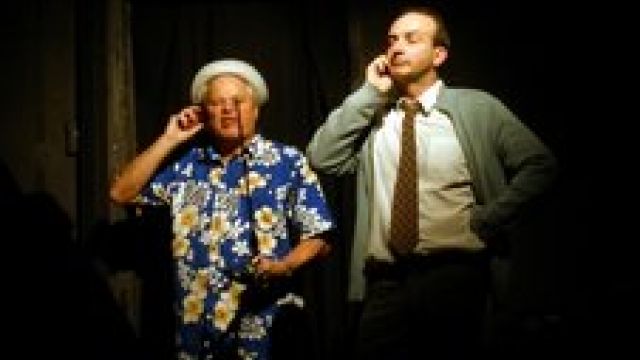 Bondi Legal tells a classic underdog story. Steven McGrath plays a lawyer just starting out in his career. He takes a job as a locum, covering for a lawyer who is going on holidays. The first day on the job he finds out that the lawyer has left him with a bomb. He has to appear in court to act in a case where a mother is taking on a large pharmaceutical company in a case where the claim is that her daughter’s racing mare lost some of its hair after using one of its products.
The play is done with lots of stirring emotion for the underdog; a large dose of venom is vented at the corporation, represented by their arrogant young lawyer, and incorporates plenty of humour and witty dialogue.
Richard Cotter’s direction keeps the action flowing well, and he wins good performances from a strong cast.
Steven McGrath yet again shows what a fine comic actor he is, exemplified in a very funny dream sequence. Brigid O’Sullivan shines as the iron willed woman ala Erin Brokervich. Tricia Youlden is a stern, convincing magistrate. Daniel Felkai plays the ‘rotweiler’ corporate lawyer. Peter Talmacs was tremendous playing multiple roles, including the holidaying lawyer and a range of dubious experts.
Bondi Legal is Tony Laumberg’s ninth play, and the first to be set primarily in the courtroom. The courtroom structure serves his writing and humour well. A funny and touching play, Bondi Legal plays the Tap Gallery, Darlinghurst through the month of May.
David Kary