The Book of Everything by Richard Tulloch, based on the novel by Guus Kuijer. 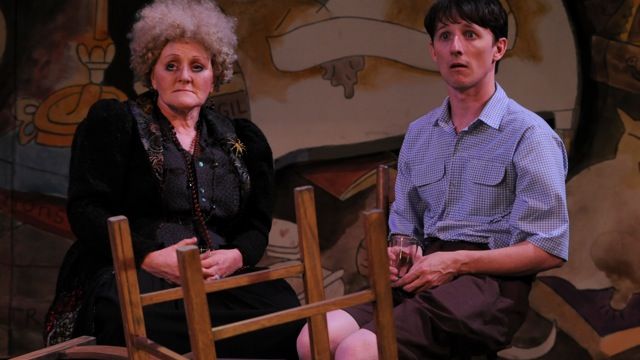 Surrender to the infectious wonderment of Thomas Klopper, nearly 10, and share a joyous theatre experience in The Book of Everything, engaging with the world through the eyes and heart of a wonderful hero, as he colours it with joyful, exotic fantasy.
Enter Thomas’s world naively, with the help of Kim Carpenter’s delightful picture book setting. Playwright Richard Tulloch has sensitively adapted Dutch writer Guus Kuijer’s challenging, enchanting short novel, and director Neil Armfield has conjured it to life with theatrical magic.
Matthew Whittet’s wide-eyed Thomas draws the audience effortlessly into his world. A vibrant acting ensemble ensures the whole story a rich telling.
The Book of Everything is moving and beautiful, but it has a dark core. Despite a façade of devout Christianity, Thomas’s controlling father beats his wife, and administers harsh, unequivocal discipline to his children.
The real world of Holland in 1951 still bears the scars of the obscenities of World War 2 and Nazi occupation. Dark memories haunt the grey world of older inhabitants – Thomas sees vibrant tropical fish in the canal, and finds beauty in Eliza, a girl with a leather leg that creaks when she walks. He records all of this in his exercise book – The Book of Everything.
Vividly larger than life, Belvoir’s production of The Book of Everything effervesces rich humanity.
Adult actors play the pre-teens and teenagers (Alison Bell as Thomas’s sister Margot and Yael Stone as Eliza), reminiscent of another Armfield hit, Small Poppies, somewhat taller.
It’s a story with many inversions.
Peter Carroll plays Father, thumping his Bible (the only true book), while beating his wife; the real villain, but a genuinely human one. He’s also delightful as the vicious neighbourhood dog.
The old lady next door (Julie Forsythe) really is a witch, it turns out, but she is also wise, generous, caring, and introduces Thomas to books which he relates to.
Thomas is beaten for not knowing the formal catechism, yet it’s him, not his god-fearing father, who’s in direct, first name basis communication with Jesus (John Leary), who also has father issues.
Biblical plagues of Ancient Egyptian proportions descend - the water in the fishtank turns to blood, and a plague of frogs descends – using delightfully simple theatrics.
The father rejects these biblical and other signs, so finally it is up to his children to act courageously, with the help of wiser, more colourful adults.
Among them is eccentric bicycle riding Aunty Pie (Deborah Kennedy), whose insistence on the right to wear trousers helps bring matters out into the open.
“What do you want to be when you grow up?” Aunty Pie asks Thomas near the play’s end.
“I want to be happy, that’s all,” he replies.
Adults and children will share and celebrate that desire as they leave Belvoir Street Theatre.
Neil Litchfield