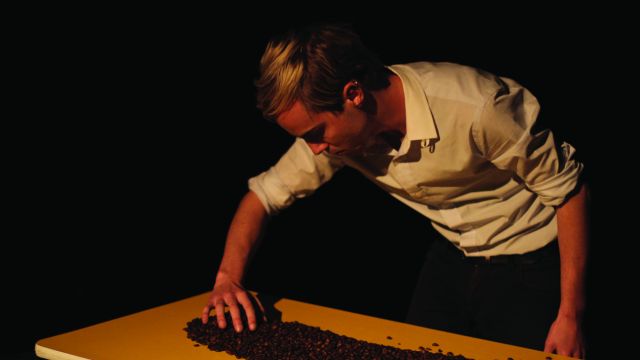 A Boy & A Bean at PACT promises to “walk head first into the marriage equality debate” but strangely avoids overtly discussing politics at every turn. Amidst some of the most tumultuous gay politics the country has ever seen, the softer, subtextual tack taken by writer and performer Nick Atkins lacked the fire and guts necessary to lift A Boy & A Beanout of the ordinary to the theatrical extraordinary.

Presented as part of the Sydney Gay and Lesbian Mardi Gras, A Boy & A Bean recounts the everyday experiences of Jack, a gay man living in Sydney, and his joyful, devastating and enlightening relationship with his partner. Atkins plays three characters – himself (Jack), his partner (David) and a philosophical giant reminiscent of the Jack and the Beanstalk tale  – in a series of vignettes as he works though falling in love, moving in and eventually proposing to the love of his life.

The text addresses homophobia, Liberal governments, and the same-sex marriage debate both directly through facts and figures and indirectly through off-hand comments and in-jokes. However, it feels like Atkins is treading water trying not to confront and offend. There are hints of the anger he feels at the blatant discrimination homosexuals endure on a daily basis but Atkins holds back.

A Boy & A Bean is best suited for those not fully convinced about the same-sex marriage debate. Its gentle message that gay people are just like you and me so there is no reason to discriminate who they love is an important one. Whether PACT will get that audience or whether Atkins will end up preaching to the choir is yet to be determined.

A Boy & A Bean makes a worthy contribution to the canon of self-devised, one-man gay and lesbian plays, and tells an important, relatable story. A little more performance bite and a lot more political bark would have given Jack’s journey up and down the beanstalk a greater sense of adventure and a bigger dramatic pay-off.