The Boys by Gordon Graham 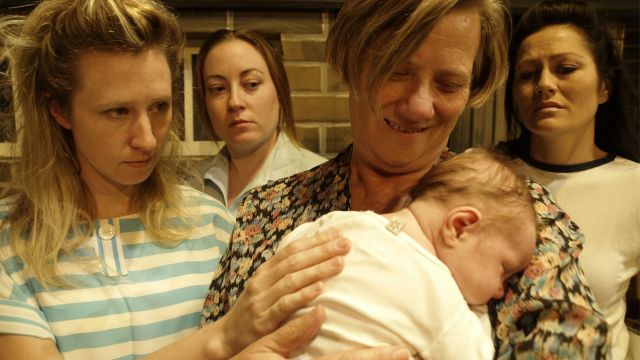 The Boys is definitely not a ‘pleasant’ night out. Vaguely based on the Anita Cobby case (though by a West Australian author), it tells of a family tied to an unthinkable crime and the effect it has on the women in particular.
Dannielle Ashton is known for producing hard-hitting theatre, and she pulls no punches. This was raw and confronting. Her casting was outstanding, especially with the women, and the men – particularly Murray Jackson provided strong support.
Val Riches played Sandra, mother of a criminal trio. This stage veteran of forty years showed an amazing depth with this conflicted woman who thinks her sons can do no wrong. Dramatic roles are obviously her forte.
The girlfriends of the boys could not have been more different. Julia Hern’s Michelle, with her eighties perm and tight jeans, was dedicated to her man. Outspoken and opinionated, she had a strong presence. Leah Maher played power suited Jackie, who has struggled to rise above poverty and crime. Initially reticent, we realised the reason for her reserve in a moving disclosure. Krysia Wiechecki was a fragile young pregnant woman with little self-esteem, who is content to accept abuse for the necessity of having a boyfriend. All were fascinating portrayals.
While the sets were outstanding, costumes excellent, lighting movingly appropriate and performances strong, this production lacked a certain je ne sais quoi - and while the subject matter left some cold, it was probably more a lack of cohesion.
This was one of the most talked about productions in some time and has divided audiences and critics alike. That is a sign of something special.
Kimberley Shaw.