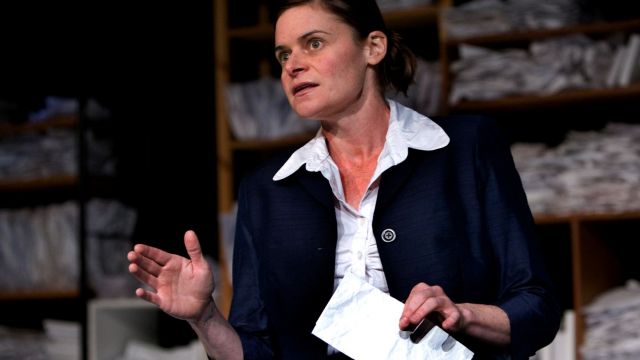 There's a new season of Brand Spanking New at the New Theatre, put together by the season's Artistic Director Augusta Supple. 'Brand Spanking New' is divided into two separate weeks of short new Australian plays. I went along to Week One of the season and was impressed with some clever short pieces and some fine performances.

Rick Viede's piece Matt Lauer was a clever take on an adolescent boy's crush with a television newsreader. The piece was neatly staged by Julian Lovick with Matt Lauer sitting smugly in his anchor chair stage right as the boy mostly held centre stage as telling of his huge crush on Lauer and how Lauer would be able to understand all of his problems and his issues with his family. The piece neatly captured the crushes adolescents do get on celebrity figures, and did so with gentle humour. The piece featured sensitive direction by Louise Fischer and the performances were spot on with Jeremy Just playing the smug newsreader, and Julian Lovick was very convincing as the infatuated adolescent.

Tamara Asmar's Queen of the Night was an interesting but not fully realised piece about an attractive young woman who, on impulse, goes to see a Madam at a brothel for some 'comfort', and finds that the experience leaves something to be desired. Director Jennifer Monk and cast Tanya Weller and Abi Rayment work hard with the material.

Jonathon Ari Lander's Measure was a powerful piece about suffering under a terrorist regime. Felino Dolloso plays Lohr a man who tells a young lady played by Suz Mawer about the suffering 'beyond measure' that his people experiences under the regime. Tanya Dickson directed the piece well, holding the reins tightly as the play could easily have come across as too intense.

Jonathon Gavin's The Return had the audience in stitches. Gavin's piece was a richly comic take on the complex relationship between intrepid explorer Matthew Flinders and his wife Anne Chappelle. The piece worked around the notion that Flinders was something of an absent minded Professor type and it was always a struggle for his wife to get his attention. Augusta Supple directed the piece at an aptly brisk pace. Natalie Saleeba gave a wonderfully comic performance as the exasparated wife and Matt Charleston was just right in the straight man role of Matthew Flinders.

Week 2 of Brand Spanking New commences this Wednesday at the New Theatre, Newtown and plays until Saturday evening. The program looks good with new work by playwrights of the quality of Verity Laughton, Timothy Daly and Mary Rachel Brown.