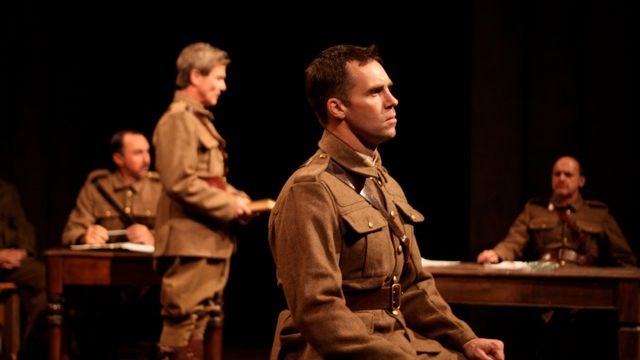 This military courtroom drama, based on Kit Denton’s novel, stands alongside Rusty Bugles and Simpson in bringing the theatre of war to the stage. The fact that Harry Morant’s story lives on, and that the injustice of his execution still rankles, is a telling reflection on the politics of war. As well, Morant and Hancock have come to symbolise the less-regulated, more laid back, daring Aussie ‘diggers’ that were the bane of many British officers in The Great War.

So, it is no wonder that, as a serving military officer, Andrew George was interested in ‘The Breaker’s’ story and the injustice of his execution – and that, as a recently trained actor, he wanted to revive the play. His enthusiasm, in collaboration with co-producer Justin O’Brien and Director Gareth Boylan, has resulted in a very tight and moving production.

There are some lovely pieces of direction. Boylan uses the theatre of military precision and movement to keep the fast pace of Ross’s play. The actors do not leave the stage unless they have a costume change, and sit in military pose, fists closed on knees at the back of the stage when not actually speaking. Here, they are always in focus and follow every minute of the action. A highlight of the production is the entire cast rising to sing, especially their rousing rendition of “Dolly Grey”.

The staging benefits from the authenticity of the uniforms and military accoutrements of the period – and the austere set (Jessica Martin) and creative lighting (Teegan Lee). Dark and light prevail, in line with the travesty of the trial and some moments of levity – mainly provided by Chris Miller as the ebullient Lt Peter Hancock. Miller’s depiction of the rebellious Hancock is strong. He is ‘in’ every moment, watching, reacting. 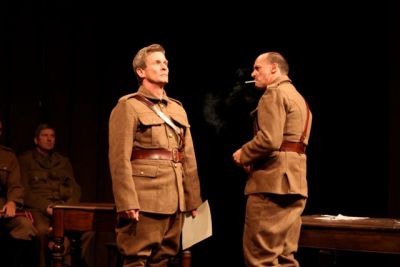 George, as The Breaker, is the typical soldier, “straight of limb, true of eye … staunch to the end”. He plays to the legend of Morant and his physical portrayal is strong and moving. Unfortunately some of the dialogue is taken too fast and important lines are lost. Perhaps this was first night nerves and will improve as the production proceeds.

As Major Thomas, the advocate taking the accused through their hopeless case, Mark Lee is outstanding. His frustration and controlled anger pace every courtroom scene. His command of the stage pushes the action. James Lugton, as the reluctant prosecutor, Major Bolton, is a balanced foil for Lee’s Thomas.

Dave Kirkham and Richard Cotter as Lord Kitchener and Colonel Hamilton, are suitably arrogant and defensive, removed from the action, playing the politics of war despite the resulting cost of lives. It is a shame that the discrepancy between the British officers and the Australian recruits is not shown as strongly at the beginning of the play.

Of the remaining cast, who fill their roles purposefully, first time actor, military officer Richard Mallett is a ‘find’! His depiction of Captain Taylor is tellingly realistic, as is the strength of his focus throughout the play.

Harry Morant and Peter Hancock, and the young George Witton, have become Australian  war ‘heroes’. They followed orders – and bore the brunt of betrayal and military injustice. It is good that their story is being told again in a production that is so authentically staged and is supported so strongly by contemporary military personnel, especially in the lead up to Anzac Day.