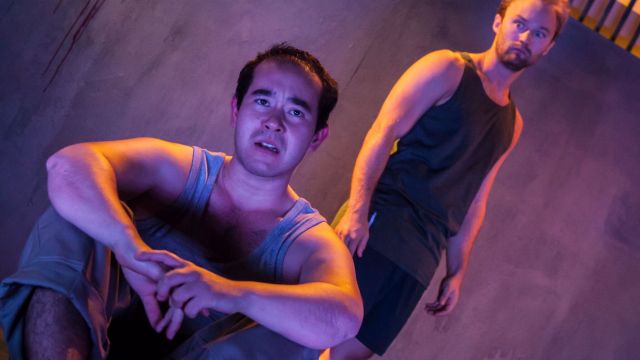 Three Australian men wake up in big trouble in a jail cell somewhere in Asia after a night they can’t remember. The simple but striking set gave the production immediate credibility. The concrete floor and wall were set off against a bright yellow sun peering through the steel bars in the window. The sound scape too was effective – perhaps the only thing missing was the smell of a stinking jail hell-hole, but mercifully the audience was left only to imagine this.

The Australians are utterly bewildered. Cuong (Badaidilaga Maftuh-Flynn) is a student doctor and naively asks for help from a guard when another prisoner Ryan (Patrick Diggins) puts him in a headlock.  The audience laughed at his weak attempt at resistance. Cuong is naively hoping that he will be released in time to catch a flight home, but he is not going anywhere.

The third man in the cell, Bryce (Josh Anderson), is the most charismatic character in the room. He’s had big nights out and seen the inside of a jail cell before, but soon his bravado is crushed. He faces the reality of many on the inside, that relationships with family on the outside can fracture. The most touching part of the play was his desperate telephone call to his fiancé. Familiar ground with Australians languishing in prison overseas is covered. The chaos of the media, lawyers circling like sharks and a lack of understanding of the gravity of the offence they have committed. One by one the inmates begin to crack under the pressure until their fate is sealed.

In this new work by Jordan Shea there is a general description of the offence which got them into jail but perhaps in a future draft of this play it could be explored more thoroughly. It was nonetheless an impressive production.