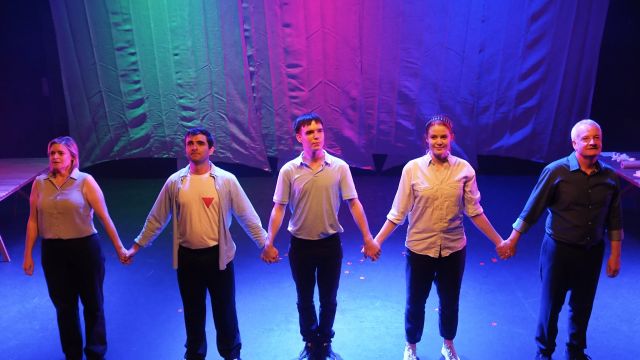 a touchstone not unlike the Mardi Gras arrests in Sydney a decade earlier.

Five agile actors relive the campaign, led by Rodney Croome (Mathew Lee) and partner Nick Toonen (Simon Croker), with each actor leaping through many roles on all sides of the battle. Decent doesn’t resile from the vile abuse, both organised and personal, and much of it spoken into the parliamentary record.

There’s a nuanced Sir Michael Kirby (underplayed by Tim McGarry) advising against going to the UN (they did and won) and later excusing himself from the High Court case; numerous journalists (Madeline MacRea); and Jane Phegan shines as Croome’s sympathetic mother and Greens Leader Christine Milne.

Martin Kinnane’s design of trestle tables and chairs doesn’t add much and, while the opening was a little undercooked, director Kim Hardwick keeps all the balls in the air.  It’s an informative, important play which is also moving, shocking and entertaining.

Backed by Patrick Howard’s compositions, the switch is often thrown to vaudeville, notably in a glorious send up of old Tasmania’s gothic obsession with sodomy.  The Campaign was first performed two years ago in Hobart on the anniversary of those market protests.