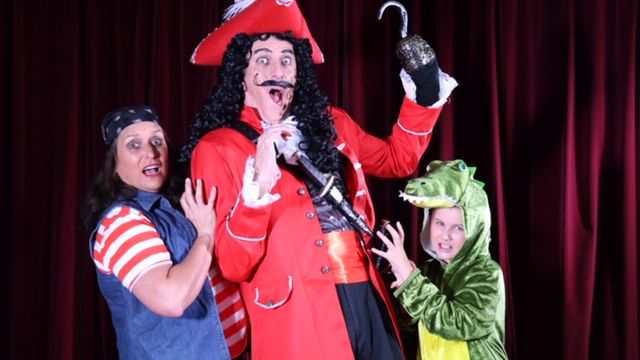 This production is an interesting and exciting way to start the year as it allows the young, student performers a chance to show and develop their skills.  Captain Hook! We remember what a nasty type he was and here he is joined by an Indian tribe, Peter Pan, a family of three kidnapped from England and, of course, a crocodile. The plot had more twists and turns than a mountain road but it was presented in such a way that the audience was on track. In fact, the audience members became part of the show at times

Director Jean Bowra has manipulated her cast of 28 really well, as many were quite young performers. The singing and dancing added to the effect well. The costuming was excellent, particularly that of Captain Hook, who looked as I had always imagined he would. Tom Burrell was an imposing nasty piece of goods throughout, as he dominated the action in this very good performance. He was well supported  by Briony Iles as Peter Pan, Susan Harding Smith as Dame Dotty Darling, Helen Bradford as Smee , Annie Just as Sharkey and George Caddy as Running Water.

What was impressive was the standard of acting by the younger cast members. Jade Phillips was a very good Wendy Darling while Amelia Mitchell was a very effective crocodile. Not only did the young performers act well, they did so with excellent clarity for the audience.

Mousetrap Theatre has offered a well directed and acted pantomime which is great for the parents and younger family members.