Carlotta: Queen of the Cross 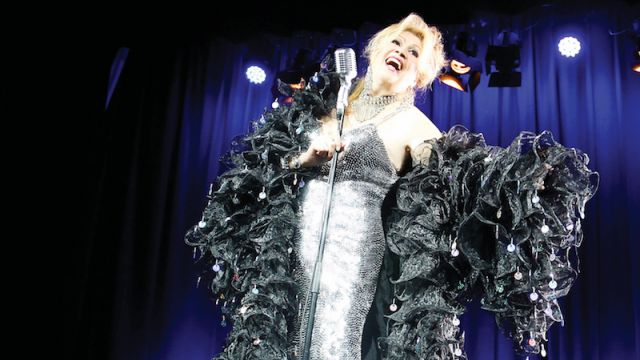 Proudly 75 years of age, with 54 years in entertainment under her sequined rhinestone belt, the Australian icon who only calls herself “Carlotta” (no other labels, darlings) conducted a glamour plus “camping” event for a sold out, one night only hour of cabaret in the Fortuna Spiegeltent. Backed by a three piece band that included Adelaide’s own much loved musical performer Michael Griffiths, she vamped, she tramped, she gossiped shamelessly and hurled politically incorrect statements and barbs into an adoring audience who were spellbound enough to even applaud enthusiastically when she made it up and down the stage steps without incident. She could do no wrong.

All glammed up in two different sparkling and feathered evening gowns, she personified old fashioned, over the top glamour. Opening appropriately with “There’s No Business Like Show Business”, she delivered songs and patter in the style for which she was loved and revered from Sydney’s famous Les Girls review shows. No-one and nothing was safe, with Carlotta even including intimate secrets of both her old and new anatomy.

A nice segue was provided by Griffiths and the band (to allow her to show off another fabulous frock!) who sang, as a tribute to Carlotta’s friend Peter Allen, a montage of Allen’s much-loved music including “Quiet Please, There's A Lady On Stage”, Allen’s tribute to the iconic Judy Garland. It felt very appropriate.

The audience tripped over each other to be involved in her Q and A time, and Carlotta, a declared fan of Adelaide, encouraged her devoted audience to chat (and possibly regret it when she cleverly turned comments into brutal comedy), pose for photos and sing along with her range of show tunes.

A polished singer Carlotta is not, but she “sells” songs with passion, flair, humour and energy. She closed with two poignant and witty songs. “And Now the End is Near” drew a standing ovation, but she topped that with Sondheim’s “I’m Still Here”, reworked with Carlotta’s own personal story lyrics.

Carlotta was the inspiration for Australia’s own Priscilla. She is touring and should not be missed if you love or lived in the 70’s, love old style music and entertainment or want to see the grand dame who started the modern, ”high camp” style of cabaret that is now all the rage.