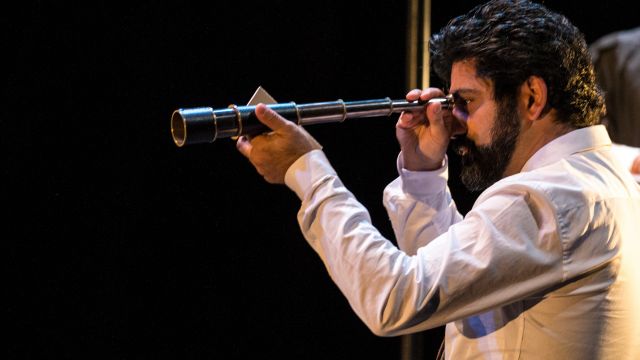 In this production, the National Theatre of Parramatta (NToP) has created the opportunity for Arab Australian artists, thinkers and performers to create a piece of theatre that calls upon the past as a means of explaining the present and expressing hope for the future.

In the supportive and creative hands of director Paula Abood, six performers have used “imagination, memory, knowledge (and) aesthetics” to devise a theatrical performance that summons the long, involved history of the Middle East through the effects of conflict on a village and a family.

Three peaked archways and painted stools set the minimalist scene. Musician Mohammd Lelo deftly plucking the qunan provides a realistic mood, which is tempered with recorded effects such as the sound of a busy market … and later those of more sinister encounters.

Beautifully photographed images of a thistle – growing, opening and eventually full-blown – become a continuing symbol throughout a story that involves an optimistic, generous hearted daughter, an energetic but guilt-ridden son, a father trying to map and explain changing boundaries, a disheartened merchant and a wandering professor, himself a symbol perhaps of the colonial past, who attempts to bring some levity in a time of hardship and despair. The story is told gently, and this seems to make its impact stronger and more compelling. Scenes morph slowly, a little too slowly at times, and though the gymnastic talents of the son are impressive, his solo scenes are perhaps a trifle indulgent.

Some moments in the performance are memorable: the professor Ghassan Hage’s timing on his throwaway lines; Ludwig el Hadda’s expressions of fatherly aguish; the gentle but haunting voices of Zainab Kahim and Sara Saleh; the sombre listing of the names of those lost or missing; and the lasting image of pieces of thistle falling into a soup that was “three parts water, one part principle”.

The symbolic seeds and prickles of this thistle have travelled from the Middle East, blown by the winds of hope and courage – and brought with them artists such as these performers who are able to “step outside the boundaries put upon them and redraw the map of their experiences”.