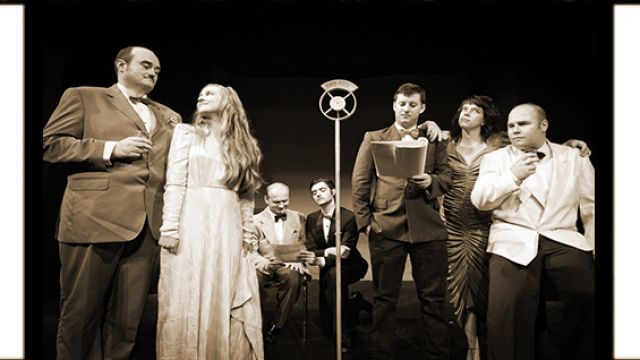 Director Sandra Harman recaptures the radio experience by dressing her cast in formal evening wear of the period. Several performers have arrived already and welcome us casually into the theatre. The pianist and drummer practise the passages they need to play in the show. Sound man, Jonathon Collins, surrounded by his array of props and gadgets, checks his cast members in and manages them (and us) as he counts down to the beginning of the ‘broadcast’.

The actors sit quietly on a row of chairs behind the array of microphones, and move forward silently to deliver their parts as needed. So the audience becomes immersed in a living radio theatre museum exercise.

We soon understand there were two distinct audiences: those in the theatre who enjoyed a visual and an aural performance, and listeners at home who had only the aural experience.

I felt the performance I saw was rather too script-focussed, too tentative and understated to be a big hit as ‘radio’. I’m sure the talented cast will ‘get under the skin’ of their characters and deliver their lines with greater animation and conviction in future performances. Even the sound effects would benefit from a little more gusto.