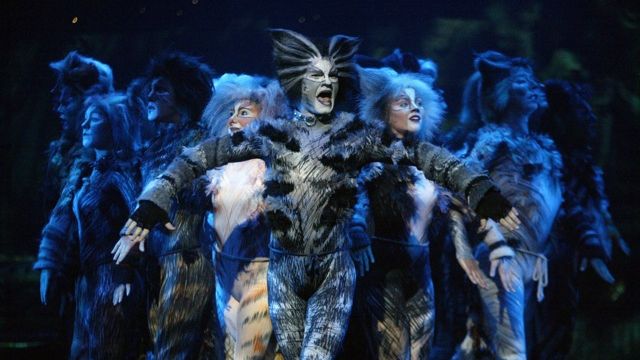 Adelaide hasn't seen a professional production of Cats for years, but since the amateur rights were released just over 2 years ago, Adelaide has played host to amateur productions in 2008 and 2009 and now professionally once again in 2010.
This production of Cats looks, feels and sounds great but something is missing, and it is very difficult to put your finger on just what that is.
The set is a traditional junk yard, the concept based predominantly on the original design, complete with a giant elevating truck tyre, but there are a few new elements, most of which are in the lighting design and the way it is instrumented.
The dancers are slick and the unison is a pleasure to watch, but the pace is often too fast or too slow, and musical director Paul White has done some interesting work on the timing of the lyric on the orchestration which is often successful but sometimes quite awkward.
The costumes look amazing, and the players - all amazingly talented dancers and singers - move wonderfully across the stage taking advantage of every nook and cranny, leaving no corner of the stage untouched.
The sound is fulfilling and encompasses the audience nicely, but words are still lost and patrons unfamiliar with the show may struggle at times to understand what is being said. The cast, however, clearly work hard to enunciate difficult words and phrases to overcome this.
Although the show is quite spectacular to watch, it does feel as though some connection is missing with the audience - a connection which should be made through the development and characterisation of each cat. Some of the performers give their cats a great essence and their performances are justly applauded with appreciation from the audience. But for the most part, the stage feels emotionless and empty, always looking spectacular, but never feeling quite right.
Great characterisations came from John O'hara as Rum Tum Tugger, an audience favourite (especially amongst the ladies) and Michael-John Hurney who plays Growltiger, Bustopher Jones and Gus.
Hurney is particularly impressive in the role of Growltiger during his rendition of the relatively unknown (especially to fans of the 'Really Useful' film version of Cats) Growltigers Last Stand, incorporating the Italian Aria In Una Tepida Notte. This song, with its vitality, energy and great characterization, stands in glaring contrast to much of the rest of the production, and Hurney, performing with Lisa-Marie Parker as Griddlebone is a pleasure to watch. Other memorable songs (pardon the pun) include the Memory (Reprise) sung by Delia Hannah as Grizabella and the always energetic Skimbleshanks: The Railway Cat, with Darren Tyler in its title role.
Director Trevor Nunn and Choreographer Gillian Lynne had the cast of cats filtering through the audience at various times throughout the show - bringing the cats closer to the crowd, but unfortunately not bringing the characters closer to their audience.
Despite the slick dancing, great set, fun iridescent lighting, and wonderful sound - the production was still lacking, but not in fun or vitality. It is the smallest audience connection, and this tiny connection, makes the biggest difference.
Paul Rodda