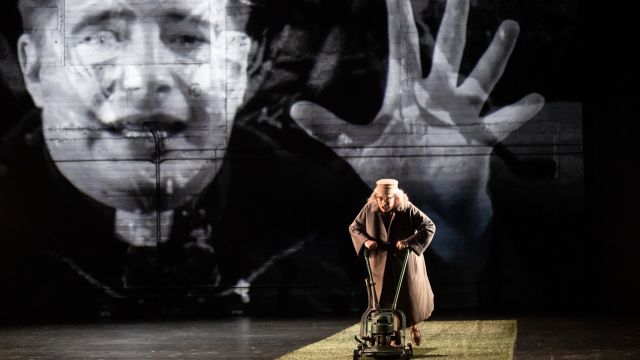 Jim Sharman directed landmark revivals of Patrick White’s plays in the 1970’s including an acclaimed Cheery Soul with Robyn Nevin as the insufferable do-gooder, Miss Docker.

He celebrates that other, younger directors have picked up the mantle of restaging White’s plays for their generation, talents like Neil Armfield and later Benedict Andrews and Kip Williams (who Sharman mentored).

Those unhappy premieres of White’s first plays in the early 60s are now forgotten; Australia’s only Nobel Prize winner for Literature is now fated to be better remembered for his plays.  And this profoundly witty, darkly poetic production by Kip Williams, with his signature expertise with a double revolve and inventive camera closeups, makes it so.

A Cheery Soul is deceptively naturalistic as White lampoons the repression and sterility of 1950’s suburban Sarsaparilla where we meet Mr and Mrs Custance (Anthony Taufa and a deliciously highly strung Anita Heigh).  Guilty in their emptiness, they make the mistake of inviting in the homeless Miss Docker. 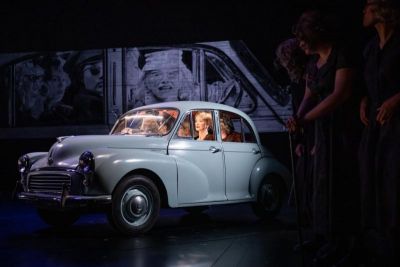 Sarah Pierse plays her magnificently as some malevolent bird, waving her arms, always striding from her loneliness, and as the local truthteller crashing into intimacies and offering unwanted help.  Elizabeth Gadsby’s open black stage is perfect for Docker’s whirlwind pace, and the revolves dotted with iconic 50’s furniture and backdrops, a fine dreamscape as the play becomes increasingly surreal and psychologically complex.

With Miss Docker’s move into the gothic horrors of the Sunshine Home for Old People, White would have loved this vaudevillian (and drag) excess as the ensemble plays all the biddies there now caught under her monstrous control.

Tara Morice excels as the ethereal widow Mrs Lillie, left grieving for her husband – and forever resentful of Docker’s uninvited final nursing of him.

With all but Pierse playing multiple, gender-blind roles, the cast plays the old women, now clad in ghastly furs for the funeral, as a kind of mad chorus or later as locals in the church or sardonic kids teasing Miss Docker. 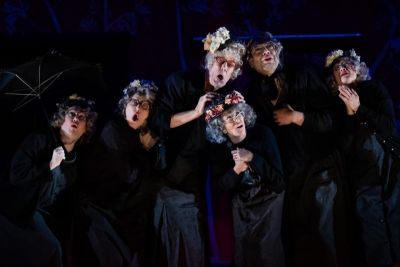 With Kip Williams nurturing such real, often hilarious characterisations and a thriller cinematic score from Clemence Williams, any threatened unravelling of the play into obscure abstractions is avoided.  Crucial is the on-stage camera work projecting intimate observations (David Bergman) so perfectly integrated into Nick Schlieper’s lighting design.   And Alice Babidge’s period costumes are a theatrical delight.

Brandon McClelland suffers painfully as the local priest loosing his congregation and Nikki Shiels excels as his wife.  Others in this impressive ensemble are Emma Harvie, Jay James-Moody, Monica Sayers, Shari Sebbens and the irrepressible Bruce Spence.  It’s a must to see.