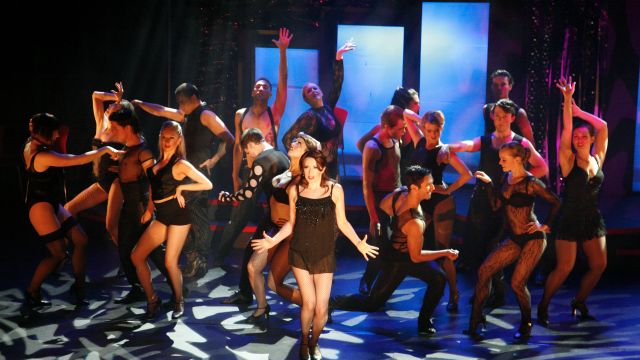 Classy staging, imaginative lighting, and subtle direction combine with the most adroit handling of sophisticated vocal harmonies and truly outstanding instrumental musicianship to create a musical that, though it won't have you on the edge of your seat, will have you tapping along with a smile throughout.  In Chicago we have the stage realisation of true-to-life characters from the 1920s, principally two women accused of murder who must use their charms to escape the threat of execution.

The band, conducted by Ian McLean, well deserved the standing applause it got, with masterful playing and careful timing. Equally outstanding were the sophisticated vocals that Leisa Keen obtained from the many performers frequently singing against each other with admirable exactness. Ironically, only a couple of the principals missed occasional notes, and only because they couldn't hear themselves properly (unsurprisingly, as sometimes the audience couldn't hear them either). Slight glitches such as these and occasionally leaving front-stage performers unilluminated, no doubt simply opening-performance bugs, won't mar your enjoyment of this tale told in musical numbers.

See it if you'd enjoy a night of light-hearted risqué music with sauce.